NJ Judge Ruled State Most Have Gay Marriage But Will Christie Appeal? 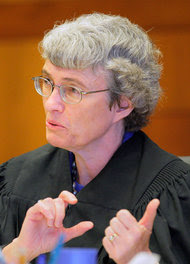 A New Jersey judge ruled on Friday that the state must allow same-sex couples to marry, saying that not doing so deprives them of rights that were guaranteed by the United States Supreme Court in June.

Judge Mary C. Jacobson
It is the first time a court has struck down a state’s refusal to legalize same-sex marriage as a direct result of the Supreme Court ruling, and with lawsuits pending in other states, it could presage other successful challenges across the country.
The decision was a rebuff to Gov. Chris Christie, a Republican whovetoed a bill passed by the Legislature last year that would have allowed same-sex couples to marry. His office said it would appeal to the state’s highest court. And he is likely to seek a stay preventing same-sex marriages from beginning on Oct. 21, as the judge ordered.
New Jersey was particularly ripe for challenge after the Supreme Court ruling, because of a previous ruling by the state’s highest court in 2006. In that decision, in the case Lewis v. Harris, the New Jersey Supreme Court ruled unanimously that same-sex couples were entitled to all of the rights and benefits of marriage. But the court stopped short of saying they had a fundamental right to marry, and in an unusual step instructed the Legislature to define how to confer equal protection.
“The ineligibility of same-sex couples for federal benefits is currently harming same-sex couples in New Jersey in a wide range of contexts,” wrote the judge, Mary C. Jacobson of State Superior Court in Mercer County, on Friday. “Same-sex couples must be allowed to marry in order to obtain equal protection of the law under the New Jersey Constitution.”
Legislators responded to the 2006 court ruling by passing a bill to allow civil unions, but same-sex couples sued again, arguing that civil unions denied them many benefits, particularly in health care decisions and financial matters.
The United States Supreme Court’s ruling in June striking down the federal Defense of Marriage Act meant that the federal government must provide the same benefits to gay married couples as it does to heterosexual married couples. Justice Anthony M. Kennedy noted in his opinion that the ruling was “confined” to legal marriages, and several federal agencies have since said that partners in civil unions would not be extended benefits, including those having to do with immigration, tax status and health care. Thirteen states and the District of Columbia allow gay couples to marry.
The same-sex couples in New Jersey pressed for a fast judgment after the Supreme Court’s decision. Judge Jacobson agreed with the plaintiffs that the federal decision demanded a change in New Jersey, to abide by the state’s earlier ruling recognizing equal protection for gay couples.
“Under these circumstances, the current inequality visited upon same-sex civil union couples offends the New Jersey Constitution, creates an incomplete set of rights that Lewis sought to prevent, and is not compatible with ‘a reasonable conception of basic human dignity,’ ” she wrote, quoting from the earlier State Supreme Court decision.
While the decision is limited to New Jersey, gay rights advocates said that it would help fuel the argument that marriage is a fundamental right for gay couples.
“Other states may not have a Lewis decision that says that not giving same-sex couples an equal footing violates the Constitution, but I think that argument is available, and a vibrant argument to make,” said Hayley Gorenberg of Lambda Legal, who argued the New Jersey case on behalf of Garden State Equality and six gay and lesbian couples and their children.
The federal decision, she said, “made the freedom to marry even more urgent than before because the state stood between these families and a host of federal protections, benefits, rights and responsibilities.” She hailed Judge Jacobson’s ruling as “thrilling.”
The ruling heightens the political drama for Mr. Christie, who is up for re-election in November, and is considered a leading candidate for his party’s nomination for president in 2016.
His Democratic opponent, State Senator Barbara Buono, called the ruling “a stark reminder that Governor Christie stands on the wrong side of history.”
“The courts have spoken and the people have spoken,” Ms. Buono added. “It is time for Chris Christie to stop blocking equal rights for all New Jerseyans.”
But the court ruling might not work against him in a presidential campaign as he courts conservative voters in key primary states. He frequently rails against the New Jersey Supreme Court as too liberal, and has tried to fill it with judges who would rule more conservatively on issues like affordable housing and school financing.
If the appellate court rules against him on same-sex marriage, and even opponents believe there is a strong chance it will, Mr. Christie could simply campaign against activist judges. He could even ask the appellate court to push the case immediately to the State Supreme Court for quick resolution.
When Mr. Christie vetoed the same-sex marriage bill, he urged lawmakers to put the issue before voters. The Democratic-led Legislature declined, saying that questions of civil rights should not be subject to a referendum.
The governor’s office, in a statement on Friday, signaled that he intended to make the Legislature, if not the courts, his boogeyman. “Since the Legislature refused to allow the people to decide expeditiously, we will let the Supreme Court make this constitutional determination,” the statement said.
Legislative leaders, working with state and national gay rights groups, are pushing to override Mr. Christie’s veto, which they have until January to do.