Egyptians Are Getting Use to Military Rule Better Than The Brotherhood 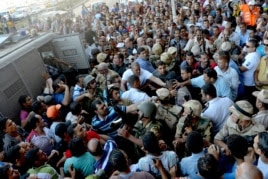 There are those voices that are calling for an exclusion of the Brotherhood and of political Islam as a fundamental threat to the Egyptian state," Morayef said. "And they then justify that by using a discourse of terrorism, to say that the Brotherhood are terrorists, and therefore should be excluded completely. And I think that’s incredibly dangerous, and incredibly destabilizing."

General Sissi says he has no ambitions to run for president and aides say he’ll only do so if the Egyptian people demand it. In the current climate, those demands seem to be growing.


Still, the Brotherhood continues its protests - despite being banned by an Egyptian court earlier this week.

In a Cairo suburb last week, several thousand Brotherhood supporters voiced their continued anger at the ouster of their president and the killings of fellow protesters.