The men Above are of the two victims. This Crime occurred the night of the 13th. According to police reports the victims of the attack were two men, ages 53 and 27, who were holding hands on their walk home from seeing a movie.Police are reporting an apparent anti-gay assault in Chelsea last night at 12:10 a.m.


Cops said the victims had just turned west onto 24th Street from 9th Avenue when they were confronted by two teenagers who demanded: “What are you looking at, you f—g f—ts?”
The situation reportedly escalated into fisticuffs with four additional attackers joining the fray.
The six assailants piled on the two victims, cops said, with one of the original two continuing to yell “f—t” as they punched both victims in the face and stomach.
Cops said the attackers fled on foot toward the Chelsea Elliot Houses. The victims reportedly called 911 and were taken to Beth Israel Hospital. One of the victims suffered swelling and cuts to the left side of his face, and the other had a gash on his chin that required seven stitches.
They were treated and released last night, after NYPD officers with the Special Victims Squad met with them at the hospital.
Special Victims deemed the attack a bias incident. Cops said the attack appears to be motivated solely by the victims’ sexual orientation as there was no previous interaction between the victims and the attackers.
Cops described the original two assailants as black teens, both about 5-foot-8 or 5-foot-9 and 140 to 150 pounds with short black hair. There are no clothing descriptions available.
This particular news I first saw on tv. They were showing Chelsea and the reporters were saying that no one could figure out why? Chelsea is one of the more Gay Known neighborhoods in the city. If he would have added rich gay, He himself could have figure out that economics was mixed up in this thing. One of the victims said that the neighborhood is full of gays. They show Chelsea on a current video and you saw the upper class that the end of Hell’s kitchen in Manhattan has become. Then they show where the alleged perp lives and he lives right there. He just doesn’t live in any plush building. He lives with someone (another guy)in one of the very old NyCHA apartment buildings. They stick there like a sore thumb. They are kept clean but there are problems that have always come out of those buildings going back to when Chelsea was the old Chelsea of Hell’s Kitchen. 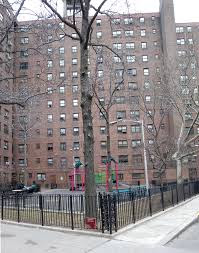 No body today could cross the dots and realize that these guys live in a neighborhood that was gentrified and the people living there had to go (Except NYCHA).

You know to have affluent working people and the very poor together is done in NYC withoput any problrms.  That’s a way of life here. This only applies to work. The poor is there(Chelsea) because rent control and NYCHA in which they can get an apartment for what some people get for cable. But they see what other just throw away and the places they go in the neighborhood and it makes them feel bad because they can’t afford the stores and bars, Restaurants in their own neighborhood.
Come on, clear as day. A poor(as in $) goes out with the wrong hard on for his neighbors and he might not care they are gays, if they were British he would have call them racist British names and then try to rob them , hit them get his rocks off for the man that lives right next to him yet they can live so good and he can't even find a job unless is a messenger and not even that he need a bike and permit or hr is just another leach that like to lives on others.

It seems by what these victims were saying that they don’t know the neighborhood they live in and it’s story. Living an eaasy life in which you don’t have to worry what lunch you are going to have. Bread, or bread with sardines, or tuna. Bread with any meat you want.
They can’t go to those restaurant and eat there or drink there, or have fun there. These people of the new Chelsea have to learn what those red ugly old buildings mean. That they are not loved because they are gay, may be not hated but not love if  they live in too much of a higher class and walk around showing it with not bothering to even look at other people in the neighborhood. Even I can’t afford to go and have cocktails or lunch like I use to there. I can’t afford it.
To Me and we will find out more as these guys talk which might or not mean much because they are going to talk what ever talk gets them less of a sentence and off the Hate Crime, which is very easy to do. In this case Im convinced that the reason for this was economics and hatred to everyone who does well and lives well. Sometimes we forget that in NYC you have homeless families and hungry school kids that you bumped to everyday. You still have the elderly buying cat food without cats. I wonder if the people of Chelsea ever think about that.
If we are to be one family of NYC dwellers,  we need to learn to be aware of the impact we
make in the neighborhood.
On the other hand I have to give it to these guys (the victims) that fought these guys and were not intimidated. Im sure these bunch of guys will think twice about picking on gays. Let them go and pick on the Soprano’s family.
Adam Gonzalez

Email ThisBlogThis!Share to TwitterShare to FacebookShare to Pinterest
Labels: Mugging