A Sikh Columbia Professor Attacked But Overwhelmed by Support 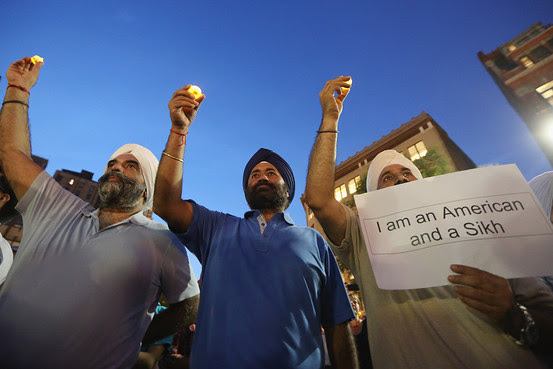 A Columbia University professor who is Sikh said Monday he was overwhelmed by the support he received since being attacked by a group of young men who called him "Osama" and a "terrorist."
Prabjhot Singh, 31, told reporters on Monday he is thankful that his injuries, including a fractured lower jaw, are not worse.
The attack occurred around 8 p.m. Saturday in upper Manhattan. Singh said he was walking with a friend after dropping off his 1-year-old and his wife at the family's apartment when he was approached by a group of 12 or 15 young men.
"I heard 'Get him. Osama.' I heard 'terrorist.' And I felt somebody grab my beard," Singh said. "What ensued was punching until I was ultimately on the ground."
Singh said three bystanders intervened and stopped any further damage, but his lower jaw was fractured and was wired shut by an oral surgeon on Sunday.
The NYPD's hate crime task force is investigating the crime as a possible bias attack. Surveillance video released by police shows about a dozen men on bicycles circling around the area where the attack occurred.
Police say Singh was punched and kicked about six times.
Sikhism is a peace-loving religion that originated in India and preaches equality and a commitment to justice. Its practitioners have been targeted by attackers who in some cases confuse Sikhism and Islam because Sikh men and boys are required to wear turbans and beards.
Last year, Singh was the co-author of an op-ed piece in The New York Times that accused the federal government of failing to accurately measure the extent of anti-Sikh violence.
The article was a response to the Aug. 5, 2012, shooting at a Sikh temple in suburban Milwaukee in which a white supremacist killed six people before fatally shooting himself. In it, Singh and his co-author argued that it is wrong "to assume that every attack against a Sikh is really meant for a Muslim." They said Sikhs themselves have historically been targeted.
Singh said that after Saturday he feels "a deep amount of empathy for all the other people who have experienced things like this, whether or not it makes the news."
New York City Democratic mayoral candidate Bill de Blasio denounced the attack as a "hateful act of violence."
"Our Sikh community has faced bigotry before — but its resilience and compassion have always prevailed," de Blasio said in a statement.
Twenty years from now, Singh hopes that the stereotype of a man with a beard and a turban will change. Instead of invoking fear, he said, he hopes people will understand that a Sikh person would help you in times of need.
"We can recognize that turban and beard sitting next to you on a plane may be your first line of defense," he said. "The first person to jump into a line of trouble for you."
Over 5Million Reads Adam Gonzalez at September 25, 2013