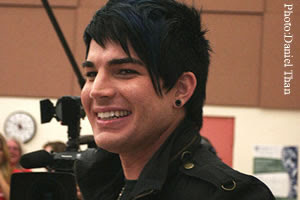 Pop singer Adam Lambert says he chased down a photographer in Miami
Beach last week because he was a “real jerk.”
After the altercation, the photographer filed a police report, in which he
claims that the 28-year-old singer became “angry and started running
toward him in an aggressive manner” and wrestled him to the ground
forcefully.
The photographer did not sustain any “bruises or lacerations,” the report concludes.
In an interview on the Fort Lauderdale-based Nick & Nina Show, the openly
gay singer denied the charge, adding that he was provoked when the photographer hurled an insult at him, which he refused to repeat.
Lambert explained that he allowed the paparazzi to photograph him on the
beach for about 45 minutes because it's “part of the gig,” but then asked
for his privacy.
“I'm just trying to kick it,” Lambert said. “And I'm definitely not dressed to be photographed. I'm not like trying to do a fashion shoot here. I'm just trying
to eat some food and have a pina colada.”
Lambert insisted that despite his pleas, the photographers refused to leave
him alone.
“Finally, I was like, fine, I'm just going to go because this is like
uncomfortable, you know, being like watched the whole time.”
Lambert, who came out gay last year on the cover of Rolling Stone, said he thanked the photographers for ruining his afternoon as he left.
“That one guy … he was in my way and he said something really rude that
I'm not going to repeat to try to get a reaction out of me, and it worked.”
“I don't know what happened. I kinda snapped and I grabbed his backpack,
I kinda yanked him back, and I just wanted to grab his camera and kinda
yell at him for a minute and take it away from him. I don't know what I was thinking. I wasn't thinking.
“That's all that really happened,” he added.

BY ON TOP MAGAZINE STAFF