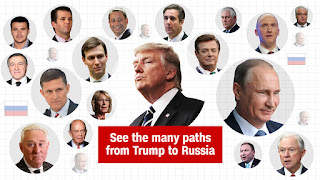 The Independent•
Special prosecutor Robert Mueller is said to be retaining additional personnel as his investigation into possible collusion by the Trump campaign with Russian interference in the 2016 election expands.
More than a year after Mr Mueller launched the probe – following Donald Trump’s firing of his FBI director James Comey – the president and his top aides are becoming increasingly frustrated by the continuing enquiries, which he has labelled a “witch hunt”. In May, Vice President Mike Pence said it was in the interests of the country to wrap up the matter and Mr Trump noted the one year anniversary on Twitter, saying: “Congratulations America, we are now into the second year of the greatest Witch Hunt in American History...and there is still No Collusion and No Obstruction.”
But a report suggests that even as Mr Trump and Republicans continue to attack and undermine Mr Mueller and his team, the 73-year-old special prosecutor is making use of more FBI and Department of Justice resources as the investigation continues to expand.
Bloomberg News says Mr Mueller, himself a former FBI director, is making more use of career prosecutors from the offices of US attorneys and from Justice Department headquarters. He has also been turning to more FBI agents, in what the news agency said was a possible indication he may be preparing to hand off part of the probe.
The news agency says investigators in New York, Alexandria, Virginia, Pittsburgh and elsewhere have been asked to supplement the work of Mr Mueller’s team of 17 federal prosecutors.
They have done so as the team is dealing with a higher number of court challenges than had been anticipated.
One strand of the inquiry, a probe into Mr Trump’s longtime personal lawyer, has been handed over to prosecutors in the US Attorney’s Office in the Southern District of New York.
On Thursday, the White House did not immediately respond to enquiries. Peter Carr, a spokesman for Mr Mueller’s office declined to comment on the report.
Bradley Moss, a Washington-based national security lawyer, told The Independent Mr Mueller’s actions could indicate he is aware some elements of the investigation could continue beyond that aspect for which he is specifically mandated.
“His personal mandate could be coming to an end in six to twelve months. But the investigation into those Russian entities could continue for years,” he says.
After he was appointed by Deputy Attorney General Rod Rosentein, Mr Mueller and his team spent $7.7m from May 2017 to March 2018, the Bloomberg report said. The Justice Department spent $9m over the same period.
Mr Mueller has so far brought a number of indictments, charging four former Trump campaign associates – Michael Flynn, Paul Manafort, Richard Gates and George Papadopoulos – with offences ranging from lying to the FBI to money laundering.
Alex van der Zwaan, an attorney, pleaded guilty to lying to FBI investigators during the investigation, and was sentenced to 30 days in prison in April 2018. He was the first to be sentenced in the probe. Richard Pinedo, a California man who sold bank accounts to Russians accused of interfering in the election, in February pleaded guilty to using stolen identities to set up the accounts.
A grand jury indicted 13 Russian nationals and three Russian companies in February.

Congratulations America, we are now into the second year of the greatest Witch Hunt in American History...and there is still No Collusion and No Obstruction. The only Collusion was that done by Democrats who were unable to win an Election despite the spending of far more money!
In that case, Mr Mueller detailed what he said was a sophisticated plot to wage “information warfare” on the US. The Washington Post said last month several additional Mueller team members were specifically assigned to the indictments of the 13 Russians.
Earlier this week, Mr Trump’s former lawyer Michael Cohen, a man who once said he would put his life on the line for the president, stated his first loyalty is to his “family and country”.
Since Mr Cohen’s offices and home were raided by the FBI in April, there has been speculation the 51-year-old “fixer” could flip, as Mr Mueller’s probe proceeded.
Over 5Million Reads Adam Gonzalez at July 06, 2018