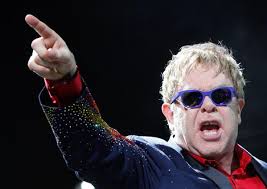 SSir Elton John has sharply criticised Russia and other eastern European governments for their treatment of gay people, warning that stigma and discrimination are contributing to a fast-growing Aids epidemic in the region.
Sir Elton, who was speaking at the International Aids Conference in Amsterdam, has long been a champion of people with HIV/Aids through his foundation.
He told a press conference he was "so anti" the discrimination faced by the lesbian, gay, bisexual and transgender (LGBT) community in eastern Europe.
“We’re here to protect them and for everyone who’s HIV [positive] but especially for the LGBT community that has suffered so badly and are still suffering and it makes me crazy,” said Sir Elton. “If there wasn’t this discrimination we could get rid of the disease far quicker.”
People have asked me to boycott Russia but you can’t boycott peopleSir Elton John
His comments came as he launched further funding from his Aids foundation for local partners working in the region.
“Until we get that idea out of our head that gay people are 'less than' then I am afraid we will still be sitting here in 20 years time discussing the same thing,” he said.
“To be an LGBT person in Russia is very difficult,” he added.
Experts are increasingly warning of a “huge crisis” in the HIV and Aids epidemic in the eastern European and central Asia region, which is the only area of the world where numbers of cases of the disease are rising sharply. Between 2010 and 2017, rates of new infections in the region rose 30 per cent with much of the rise driven by new cases of the disease among injecting drug users.
Sir Elton, whose foundation works in the region, acknowledged that working in Russia was challenging in light of conservative attitudes and discriminatory official policies. Non-governmental organisations receiving foreign funds for instance risk being labelled foreign agents by the government.
"We know what we are up against. We are not stupid,” said Sir Elton.
“People have asked me to boycott Russia but you can’t boycott people,” he added.
Sir Elton also announced a new joint initiative to tackle HIV infection in men alongside the Duke of Sussex, whom he praised for his passion and “dedication” to tackling the HIV epidemic.
Aisha Majid
Telegraph
Over 5Million Reads Adam Gonzalez at July 26, 2018