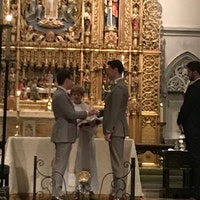 Holly Meyer, Nashville Tennessean
The Episcopal Church removed restrictions on same-sex marriage Friday, making it so all couples can wed where they worship.
While they are already permitted across much of the Episcopal Church, the bishops in Middle Tennessee and seven other U.S. dioceses had not permitted religious wedding ceremonies for gay and lesbian couples in their regions of the church. The decision made Friday by the denomination's governing body overrides those local decisions.
The General Convention, which wrapped up its triennial meeting in Austin, Texas, on Friday, passed a resolution with overwhelming support that makes it so all couples can marry in their local congregations. They now do so under the direction of their priest, instead of their bishop.
"I am thrilled," said Connally Davies Penley, a member of All Sacraments for All People.
The local grassroots group has been advocating for equal access to marriage within the Episcopal Diocese of Tennessee since Bishop John Bauerschmidt announced his ban on same-sex weddings in 2015.
Under the resolution passed Friday, clergy still can decline to bless or solemnize any marriage. But if the couples live in a diocese where the bishop theologically objects to same-sex marriages, that bishop will tap, if necessary, another willing one to provide pastoral support to all involved.
"I think it's a wonderful compromise, which respects the dignity of the bishop and his position, but still allows marriage for all in their home congregations," said Davies Penley as she prepared to leave Texas on Friday afternoon.
The final amended version of the resolution had broad support in the House of Deputies and the House of Bishops.
Bauerschmidt supported the original language of the resolution prior to the July 5 start of the General Convention. On Saturday he said in an email that he would be writing to the diocese about it next week.
“The Resolution allows access to the liturgies for same sex marriage in the Diocese of Tennessee while preserving the rights and responsibilities of the parish clergy for the use of their buildings for any liturgy. In other words, there is much to work out. It also preserves the ministry of bishops as chief pastors and teachers in our dioceses,” Bauerschmidt said.
“We will be working out what it means for our diocese with clergy and congregations in the coming days.”
This resolution builds on the General Convention's 2015 decision to approve the trial-use liturgies for marriage that made way for same-sex couples to wed in the Episcopal Church. At the time, they left it up to each bishop to decide whether or not the liturgies could be used in their diocese.
The inconsistent rules prompted couples and advocates locally and nationally to push to no longer have bishops decide the matter. They wanted all those who desire to marry in their home dioceses to be able to do so.
After the 2015 General Convention decision, 93 bishops authorized same-sex weddings, but eight did not. Bauerschmidt, who believes that marriage is between a man and a woman, is one of the eight.
In addition to not authorizing them, Bauerschmidt declined to allow clergy within his diocese to officiate the religious ceremonies or permit the weddings on church property. Same-sex couples wanting to marry were referred to the Diocese of Kentucky.
As a result of the bishop's ban, Indie Pereira and her wife Pari Bhatt opted for a civil ceremony instead of the church wedding they wanted.
Given the policy change on Friday, they are hopeful that they will be able to have their church wedding at St. Philip's Episcopal Church in Nashville, which is where they worship on Sundays.
"We're definitely pleased that it passed," said Pereira, who was sitting in a dentist chair when her wife rushed in the room to tell her the news.
The next step, Pereira says, is to have a discussion with her priest and parish to discern a path forward, but she is hopeful that she and her wife will be able to have their church wedding next summer.
She knows work will need to be done to make sure those who disagree still feel included in the diocese. She anticipates that Bauerschmidt will continue to emphasize unity within the diocese moving forward just as he has in the past.
"I feel like we can do that and we can stick together," Pereira said. "I feel like we can get through this."
The resolution does not change the Episcopal Church's Book of Common Prayer by making the trial-use liturgies permanent, which some church members had hoped would happen. Instead, the resolution extends their trial use until the next comprehensive revision of the prayer book.
Some Episcopalians did not want the prayer book altered, including Bauerschmidt, who worried it would threaten the unity of the church.
The resolution that passed Friday will not go into effect until the first Sunday of Advent, the liturgical season leading up to Christmas that starts in the fall.
Reach Holly Meyer at hmeyer@tennessean.com or 615-259-8241 and on Twitter @HollyAMeyer.
Over 5Million Reads Adam Gonzalez at July 16, 2018