Over 700 Children of US Migrants Have Not Yet Been Return

In 431 cases the parents were no longer in the US, a court filing said.
US officials separated more than 2,500 children from undocumented adults at the border with Mexico earlier this year, in a "zero tolerance" crackdown on illegal immigration.

But it was suspended by President Donald Trump last month after a fierce backlash.
Inside the chaotic effort to reunite separated families
Why the US separated children from their parents

The Trump administration says it has reunited more than 1,800 migrant children with family members. Its lawyers argue that it met the legal deadline, as the 711 remaining children are not "eligible" to be given back.

What do we know about the children?

The majority of the children were reunified with their parents in US Immigration and Customs Enforcement (ICE) custody, and 378 others were released in "appropriate circumstances".
This covers those reunited with parents who were already out of government custody, those sent to another relative or family friend, and those who are now over the age of 18.

Of the 711 deemed ineligible, 120 children's parents had "waived reunification", the government said on Thursday evening.
Dozens more remain separated because of "adult red flag", referring to situations in which the child might be at risk.

Why have the families been reunited?

A court order imposed a deadline on the Trump administration to release all children aged between five and 17.
San Diego federal judge Dana Sabraw ruled last month that all the detained minors separated under the policy should be brought back to their families by 26 July.

"By the court deadline this evening we are on track to reunite all eligible parents within ICE custody," said Chris Meekins of the Department of Health and Human Services on Thursday. But the American Civil Liberties Union (ACLU), which has sued the government over the policy, said US officials had only met "a self-defined deadline".

ACLU lawyer Lee Gelernt told reporters: "The government shouldn't be proud of the work they're doing in separation. This is a disaster that they created."

What about the ineligible children? 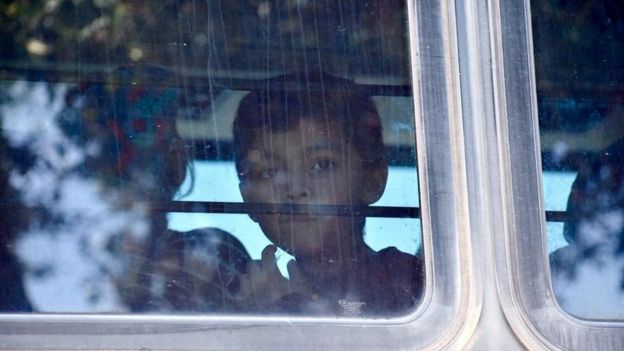 The court filing says hundreds of children are ineligible to be reunited because their parents have left the country.

The ACLU said it would try to trace the missing parents, but a former acting director of ICE, the agency that rounds up undocumented migrants, said he fears many families will never be reunited.
"There is a very high likelihood that those parents are not going to see their children again," John Sandweg told CBS News.

A child looks through the window of a bus carrying migrants near McAllen Detention Facility, McAllen, TexasImage copyright Reuters
XxXXXXX
How did we get here?

The Trump administration earlier this month reunited more than 100 migrant children under five years old with their parents, though it missed a court-ordered deadline to do so.
It said 57 of these youngsters were back with their families, though 46 others were deemed ineligible because of safety concerns, parental deportations, or other issues.

US President Donald Trump halted the family separations in late June after pictures of locked-up children and audio of them crying in distress triggered uproar.

But the reunions process has proved chaotic, with some children transported to see their parents only to end up back in their shelters after discovering their loved ones were not at the location.
The families were held after entering the US illegally, while others claimed asylum at border crossings, citing violence in their home countries of El Salvador, Guatemala, and Honduras.

The children were being sent to various care facilities across the country, while the adults were held in detention centers or prisons.