Georgia's Lawmakers Anti LGBT Antics Is Cost Them Much in $ Business $ 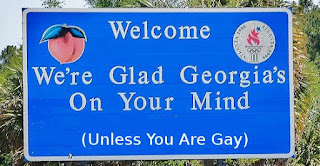 The anti-LGBT antics of some Georgia lawmakers have made national headlines for several years, and their relentless pursuit of archaic and discriminatory policies is yielding another, and not unexpected, economic consequence. CNBC announced July 10 that Georgia dropped from number two to number seven on its 12th annual scorecard of "America's Top States for Business.” A drop by in position by five points should be of concern to us all.

This is an incredible time to live in Georgia - and we can stop this backward slide before it’s too late. One of the most immediate ways we can course-correct is by telling our lawmakers that, rather than spend yet another year gridlocking over discriminatory measures that would harm our state, they could finally advance a comprehensive civil rights law that protects Georgians from all walks of life.

At a moment when states are struggling to maintain a competitive edge, Georgia lawmakers should be doing everything in their power to entice businesses to invest in the state. The future success of Georgia’s economy relies on its ability to attract businesses to relocate to the state and to attract the best and brightest talent. A statewide civil rights law would send the message that Georgia is truly open for business to all.

Georgia ranked particularly low in CNBC’s Quality of Life category, scoring a ‘D’ in a category that includes the health of the population, environmental quality, and inclusion - namely, a state’s anti-discrimination law and the ability of cities to set its own standards. Georgia is one of only a handful of states that lacks any statewide civil rights law. And for the past several legislative session, lawmakers have clashed over anti-LGBTQ bills, including 2016 legislation that Governor Nathan Deal vetoed which would have allowed businesses to refuse service to LGBT customers. Despite the business community rallying in opposition to that License to Discriminate and rightly praising Governor Deal, some lawmakers continue to target LGBT people, recklessly ignoring the economic consequences.

Georgia lawmakers’ anti-LGBT bills have taken a toll on our state’s brand, imperiling not just our ability to attract job-creating giants like Amazon, but also threatening our state’s tourism industry – which brings in about $50 billion annually and is responsible for about 400,000 jobs. And the lack of comprehensive nondiscrimination protections takes a toll on those already living and working here. A 2017 report from the Williams Institute found that the stresses and stigmas of vulnerable legal standing impacts the productivity and well-being of LGBT Georgians in the workplace. According to that study, reducing those stresses by even just a quarter among Georgia’s LGBT workforce would gain the state’s economy upwards of $147 million in revenue.

We all know that North Carolina paid dearly for its deeply discriminatory HB2, which cost the state approximately $630 million in lost revenue in just the first year after it passed. Major corporations, including PayPal, Deutsche Bank and CoStar withdrew expansion plans, which included millions of dollars in investments and hundreds of jobs, from North Carolina. Indiana’s economy and world-famous “Hoosier hospitality” was damaged after its religious exemptions act was signed into law. Since the law’s passage, the state lost more than $60 million in economic opportunities, including the loss of at least seven conventions.
But what’s become increasingly clear is that it’s not enough to merely avoid greenlighting discrimination. The CNBC report is one early indicator that our state’s progress isn’t set in stone, and the failure of lawmakers to update our laws could cost us dearly in the years to come.

Last year, we made progress toward advancing a bill that would protect all Georgians from discrimination – including both LGBT people and people of faith. The idea that treating people fairly and equally under the law somehow erodes religious freedom is, frankly, false. We believe in open and welcoming dialogue with all Georgians – dialogue that focuses on what we have in common. We can all agree that discrimination is wrong, and that common-sense policies that protect Georgians from harm can lift all of us up, strengthen our communities, and ensure Georgia can continue growing into one of the most competitive states in our 21st century economy.

Supporting equal opportunity is the right thing to do, and the impact it has on our economy’s bottom line is impossible to ignore. Strong businesses lead to strong communities. When everyone can live their lives free from discrimination, our communities are stronger and our state is a healthier, more vibrant place to live, work, and raise a family
Over 5Million Reads Adam Gonzalez at July 15, 2018