The Partisan Divisions are Harming The Family Unity, A New Study Shows 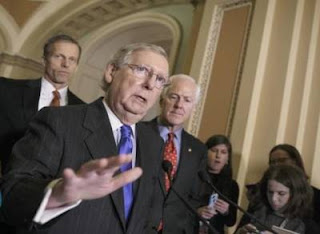 Heightened partisan divisions associated with the 2016 presidential election resulted in a shortening of Americans' Thanksgiving dinners that year, by 30–50 minutes, a new study in science found.
Why it matters: The research, using precinct-level polling information and a vast database of anonymized cellphone location records, suggests that Americans are less willing to socialize with family members who hold opposing political viewpoints. However, at least one outside expert is raising the alarm on using that level of data for non-government surveillance.
"I have not come across a paper that relied on such precise cell phone data. This strikes me as novel and innovative. It also makes me feel a little uneasy."
— Jeremy Frimer, political scientist, University of Winnip.
What they did: The cellphone data gave researchers Keith Chen of UCLA and Ryne Rohla of Washington State University an idea of which precinct a voter was in, by inferring each smartphone user's home based on the pings between 1am and 4am local time.
What they found: They found that political advertising likely more than tripled the "Thanksgiving effect" in 2016.
Privacy concerns: Frimer, who was not part of this study, said the use of the precision cellphone data raises some alarm bells, particularly in the wake of the debate regarding the 2016 campaign political ad targeting methods that were used. He said:
"Using cellphone data for national security purposes (with judicial oversight) seems like a reasonable compromise between needs for privacy and safety. Whether allowing this level of surveillance for commercial/scientific purposes is another matter and worthy of reflection and discussion. Personally, I feel uncomfortable with allowing companies to sell and distribute such personal data for commercial/scientific purposes."
Yes, but: Frimer said the analysis in the paper is "an extremely impressive demonstration of a well-established psychological phenomenon called the selective exposure," or confirmation bias, although he questioned some of its findings.
Study limitations: The study implies that there's real personal damage being done to Americans due to the politically charged atmosphere. “It has personal costs," Chen said. However, the research is only based on two years of data, and the U.S. has been through periods of intense political divisions before.
What's next:  The study's authors plan to track Thanksgiving data for 2018 and beyond to see if the partisan divisions harden, or if people get used to this level of political tension and the effects diminish.
“This particular blend of partisanship that is emerging now…I suspect that people are going to acclimate to that," Chen said.
Andrew Freedman
Axios

The postion the US is in would be a challenge to the best but the best is not what we got since he is the one tha is got us in these looming crisis' from NKorea, Iran and Now the Whole European Union and with our best and closest alies like Canada and UK 🦊

President Trump is now confronting two nuclear standoffs and fighting a trade war on multiple fronts — all at the same time.
The big picture: Trump's March decision to agree to meet with Kim Jong-un led to speculation he might hold off on withdrawing from the Iran nuclear deal, so as not to face dueling nuclear dilemmas. He didn't. Common cause on North Korea had seemed to pave the way for a trade war truce with China. It didn't. Now, Trump is slapping tariffs on America's closest allies — and they're hitting back.
Over 5.6 Million Reads Adam Gonzalez at June 01, 2018