Homophobe Supreme Scalia Got Offended on Appearance “Hate Whom You Like” 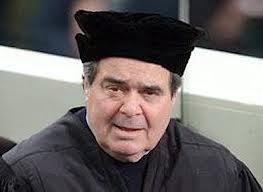 In a packed Brooklyn auditorium Friday, Justice Antonin Scalia told a law student it was "ridiculous" to think his dissents in gay rights cases have fueled hatred toward homosexuals.
Scalia's exchange with the nervous-looking law student came at the end of a spirited Q&A hosted by Brooklyn Law School that touched on other controversial issues like the NSA's spying on Americans.
That law student pointed out that Scalia has issued dissents in cases that have broadened gay rights. Those dissents may have created fodder for anti-gay hatred, the student said.
A visibly annoyed Scalia spat out, "Hate whom you like."
As students filed out of the auditorium, one student called the question on gay rights a "waste" of a last question, while another wished the evening had ended on a more positive note.
While Scalia's "hate whom you like" comment seemed brash, it reflected a point that he made repeatedly during Friday's event in Brooklyn: It's not the Supreme Court's job to decide moral issues.
Scalia has even gone so far as to say he has not expressed his views on gay marriage, despite a belief among some people that he is a homophobe. This belief stems in part from Scalia's dissent in a case that struck down Texas' sodomy law, which made this observation:
Many Americans do not want persons who openly engage in homosexual conduct as partners in their business, as scoutmasters for their children, as teachers in their children's schools, or as boarders in their home.
The language in this dissent suggests Scalia isn't gay-friendly since he implies Americans should have the right to discriminate against gays. Scalia is also famous for saying there's no Constitutional right to engage in what he calls "homosexual sodomy." But he won't come out and say gay sex or gay marriage is wrong.
It's not clear what kind of response the law student wanted from Scalia on Friday, but he probably wasn't going coax Scalia into talking about his personal views on gay people. Maybe that law student has a pretty good idea of what those views are anyway, as it's fairly easy to read between the lines of Scalia's opinions.
As another law student said on the way out the door Friday night, maybe the law student who asked about gay rights just wanted to get something off of his chest.