A controversial member of the San Francisco 49ers is back in the hot seat again.
Chris Culliver, who made news after making anti-gay remarks at last year's Super Bowl, is reported to have been involved in a hit-and-run of a bicyclist in San Jose, according to KTVU.com.
Police said that a bicyclist had been hit Friday morning at Tully and Senter roads by a vehicle that fled the scene. A witness followed and attempted to stop the vehicle in the hit-and-run, and the driver, reportedly Culliver, got out of the car and threatened the witness with brass knuckles, KTVU reports. He then got back into his car and struck the witness’ car. 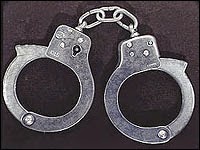 The Niners released a statement to KTVU:
"The 49ers organization is aware of the recent matter involving Chris Culliver," the statement released to KTVU. "We will remain in contact with Chris and the local authorities as we continue to gather the facts regarding this situation. As this is an ongoing legal matter, we will reserve further comment at this time."
Culliver was booked on charges of felony hit-and-run, reckless driving causing injury, felony possession of brass knuckles and misdemeanor hit-and-run for striking the witness' vehicle.
Culliver was booked into Santa Clara County Jail in lieu of $36,000, according to Santa Clara County Sheriff’s Office spokesman Kurtis Stenderup.
He is scheduled to appear in Santa Clara County Superior Court in San Jose on April 11, according to county jail records.
The bicyclist suffered minor injuries that were not considered life-threatening and was treated and released at the scene, police said.
By Rob Nagle
Bay City News contributed to this report.
Over 5Million Reads Adam Gonzalez at March 29, 2014