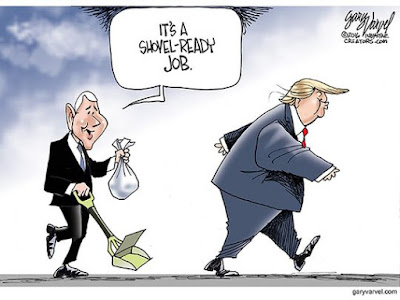 First today's the Quieter one opens his mouth to the GOP Congress on killing ACA, again. We know he is full and Christian love because he is a Christian and closes his eyes when he prays, even at the dinner table, which I find impossible for me but then I don't go around saying how Christian I am.
I can't see how he want to leave most of the American Citizens, particularly the older and infirm*(*biblical word) to make his boss happy. He really believes Trump will last the full term and he is bucking to be asked for a second run. It's been fun for him! His lying and picking up the Boss's manures has been no problem what so ever with him. He is said more than once he worked with manure as a kid working in the far.

Vice President Mike Pence is throwing the Trump administration’s weight behind the latest Affordable Care Act repeal bill — and against a bipartisan effort to stabilize the marketplaces. In an interview on Air Force Two, Pence told me he’ll call on all Senate Republicans to support the bill by Sens. Lindsey Graham and Bill Cassidy at a lunch meeting this afternoon, saying, "this is the moment. Now is the time.”

Now if we could just go back a couple of months to review what's been publicly out about Mike Pence:

Sen. Chris Murphy (D-Conn.) could barely contain his frustration over the weekend. “[T]here is real evil in the epidemic rate of lying that is going on right now,” the Connecticut senator wrote, pointing to the latest comments from Vice President Mike Pence. “This is not normal.”

We’ve unfortunately reached a point in contemporary politics where a quote like that, in isolation, needs some clarification – because Mike Pence says untrue things about a great many things.
The far-right vice president, for example, has been caught making all kinds of demonstrably false claims about Donald Trump and the Russia scandal, but the latest controversy surrounds Pence’s mendacious rhetoric on health care, starting with a speech to the National Governors Association. The Washington Post reported that Pence singled out Ohio Gov. John Kasich (R), arguing that Medicaid expansion through the Affordable Care Act in the Buckeye State has caused widespread problems.

“I know Governor Kasich isn’t with us, but I suspect that he’s very troubled to know that in Ohio alone, nearly 60,000 disabled citizens are stuck on waiting lists, leaving them without the care they need for months or even years,” said Pence.

The waiting lists Pence referred to apply to Medicaid’s home and community-based services, and have not been affected by the program’s expansion under the ACA. States have long had waiting lists for these services, and the Henry J. Kaiser Family Foundation’s executive vice president, Diane Rowland, noted that waiting lists in non-expansion states are often longer than in expansion states, which currently receive a 95 percent federal match for their newly covered beneficiaries.

Kasich’s office explained that the vice president’s claims are “not accurate,” and are “the opposite of what actually happened.” The governor’s press secretary added, “That’s what we call #fakenews.”

Pence’s office said in response that he wasn’t trying to connect Medicaid expansion and the waiting lists, but that, too, wasn’t true.

But that’s not even the falsehood that rankled Chris Murphy. Rather, when the Democratic senator complained about the “epidemic rate of lying,” he was pointing to a separate Pence claim: “The Senate health-care bill strengthens and secures Medicaid for the neediest in our society.”

Every independent analysis of the Senate proposal suggests the exact opposite is true: the Republican bill guts the Medicaid system, cutting hundreds of billions of dollars over the next decade, and leaving the most vulnerable Americans facing new peril.

We’ve grown accustomed to the vice president making bogus claims about the Russia scandal, but let’s not forget his record in the health care debate is arguably worse.

Donald Trump was supposed to travel to Kentucky on Saturday to defend the Republican health care plan, which some have begun calling “Trumpcare,” but the president canceled without explanation. (Trump instead went golfing for the ninth time since Inauguration Day.)[This is July]

Kentuckians were not, however, left empty-handed. As the conservative Washington Times noted, the vice president went instead.
Traveling to the home state of a Republican critic of the administration-backed health care bill, Vice President Mike Pence said Saturday that Obamacare is falling apart and must be replaced.

“Obamacare has failed the people of Kentucky,” Mr. Pence told an audience in Louisville. “It’s failed the people of America, and Obamacare must go.” […] Mr. Pence called Kentucky “a textbook example of Obamacare’s failures.”
Even by 2017 standards, this is bizarre. To the extent that reality still matters, Kentucky is actually a textbook example of the Affordable Care Act succeeding. As regular readers know, under Gov. Steve Beshear’s (D) leadership, the state’s success story has served as a national model, watching its uninsured rate drop from 20.4% to just 7.5%. In terms of state-by-state improvement, the Bluegrass State is tied for first as the greatest percentage improvement in the nation.

Pence pointed to increases in premiums, but (a) premium hikes were common before “Obamacare” became law; (b) the vast majority of consumers aren’t seeing sharp spikes; and (c) the Republican plan Pence was in Kentucky to promote will very likely push premiums even higher.

All of which suggests Pence was trying to deceive his audience with rhetoric he should’ve recognized as false. Have you noticed how common this is becoming with the vice president?

Usually, when we think about the Trump White House and dishonesty, we immediately think of Donald Trump, who lies with such unnerving frequency that some have questioned his mental stability. By comparison, Mike Pence may look like a Boy Scout.

But looking past the Trump comparison, Pence’s recent departures from the truth are starting to pile up. Pence’s claims about when he learned about Michael Flynn’s work as a foreign agent, for example, clearly aren’t true. This followed related claims from Pence about Flynn’s communications with Russia that have already proven to be false. (The vice president believes he was the victim in this case of someone else’s lies.)

Pence said no one from Team Trump spoke with Russian officials before Election Day, and that was untrue. The V.P. recently made claims about job creation that were also false.

Under the circumstances, if you’re looking at the White House’s motley crew and assuming that Mike Pence is the honest one of the bunch, you may be grading on an overly generous curve.
Explore:
The Maddow Blog, Kentucky and Mike Pence

The media does not seem to be paying much attention to Mike Pence. They are all focus on where Trump is golfing next or where is going to give a speech to his supporters saying basically the same thing (the good stuff from Trump comes in tweets not audible words). Rachel Maddow is the only one who is following the smell and I hope she inspires others besides me to be on the look out because if trump deserves Impeachment, Pence has been behind him and sometimes side by side with him. They are a pair and the only difference is style and tone.

Jason Zengerle
on GQ writes:
"And now, as each new day seems to bring with it a revelation, or a poll, or a tweet that feels as if it nudges the vice president—perhaps the most unexamined major political figure in modern America—ever closer to the Oval Office, the powerful and the plugged-in across Washington are beginning to form answers to a suddenly more urgent question: What happens when Mike Pence becomes president?"