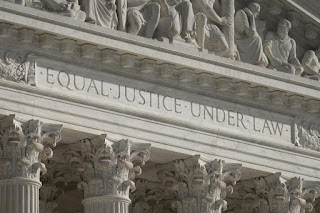 With attention fixed on the U.S. Supreme Court case of a Christian baker who refused to decorate wedding cakes for same-sex couples, a separate controversy bubbling out of Texas could give the high court an opportunity to revisit and clarify its landmark 2015 ruling on gay marriage.
The city of Houston is seeking to overturn last June’s Texas Supreme Court decision that said the right to a marriage license did not entitle same-sex couples to spousal benefits under employee insurance plans.
According to the unanimous Texas court, the federal court’s decision that allowed same-sex marriage did not decide all related matters, leaving room for state courts to explore the limits of gay marriage — a conclusion Houston’s lawyers criticized as shortsighted and simply wrong.
“The Supreme Court of Texas erred in holding that the question is unsettled, and its decision expressly encourages endless lawsuits aimed at rolling back the rights” of same-sex couples, Houston told the court in a recently filed brief.
“Equal recognition of same-sex marriage requires more than a marriage license; it requires equal access to the constellation of benefits that the state has linked to marriage,” the brief said.
The Supreme Court can accept Houston’s appeal — leading to a ruling later this year or in 2018 — or reject it, letting the Texas decision stand.
Surprise controversy
Based on a lawsuit that was all but dead a year ago, the Texas case was a surprising addition to the fight over gay marriage.
The controversy began in 2013, when Houston began offering employee benefits to the same-sex spouses of employees who had been legally married in other states.
Opponents of gay marriage sued, prompting a district judge to block the benefits, ruling that they violated a state law and constitutional amendment barring government recognition of same-sex marriages. While Houston’s appeal was pending, however, the U.S. Supreme Court overturned state bans on gay marriage in June 2015, ruling that they violated the U.S. Constitution’s guarantee of equal protection by treating gay couples as second-class citizens.
Saying the ruling ended the controversy in the Houston case, the 14th Court of Appeals allowed the city to begin offering spousal benefits to same-sex couples.
The Texas Supreme Court apparently agreed, rejecting the case in September 2016. But opponents of gay marriage launched a pressure campaign to get the all-Republican court to reconsider. A barrage of emails warned the nine judges of retribution in the GOP primaries, and Republican leaders — including Gov. Greg Abbott, Lt. Gov. Dan Patrick and Attorney General Ken Paxton — argued that the case offered an opportunity to limit the impact of the high court’s ruling on gay marriage.
In a rare reversal, the Supreme Court relented, accepting the case and eventually ruling that there is no established right to spousal benefits in same-sex marriages.
Shut out by the state’s highest civil court, Houston officials turned to the U.S. Supreme Court instead.
‘Strained interpretation’
Houston is represented by Wallace Jefferson, the former chief justice of the Texas Supreme Court.
Jefferson argues that the state Supreme Court blatantly ignored findings that were central to Obergefell v. Hodges, the ruling that allowed same-sex marriage — particularly when it said Obergefell did not address the question of whether employee benefits could be denied to the same-sex spouses.
“Yet this court declared, to the contrary, that the Constitution entitles same-sex couples to marriage ‘on the same terms and conditions as opposite-sex couples’ ” — including access to a long list of marriage-related benefits that specifically mentioned “health insurance,” Jefferson argued.
“The Texas court’s strained interpretation of Obergefell is contrary to that decision’s actual holding,” he told the high court.
Jefferson also criticized the Texas court for declaring that lawsuits, such as the one challenging Houston’s benefits, must be allowed so state courts could fully explore Obergefell’s “reach and ramifications.”
The Obergefell ruling, however, clearly and unambiguously stated that equal treatment under the law demands equal access to all of the benefits of marriage, he said.
“Left unaddressed, the Texas court’s decision encourages other litigants and courts to undermine” rulings allowing gay marriage, Jefferson wrote.
Opponents of same-sex marriage have until Oct. 20 to file a reply brief with the high court.
The taxpayers who challenged the Houston benefits have been represented by lawyers with Texas Values, an Austin-based organization that promotes socially conservative policies.
Texas Values has argued that the Obergefell ruling was limited to laws excluding same-sex couples from marriage.
“It did not purport to invalidate laws that withhold taxpayer subsidies from same-sex couples, or laws that withhold employee benefits from same-sex spouses,” the organization said in a brief to the Texas court.
In the meantime, the U.S. Supreme Court has not yet scheduled oral arguments in Masterpiece Cakeshop v. Colorado, a much-anticipated clash between laws barring discrimination against LGBT people and the beliefs of business owners who oppose same-sex marriage on religious grounds.
Paxton has asked the court to side with the baker who said his Christian beliefs precluded him from providing custom wedding cakes to same-sex couples, arguing that the First Amendment protects “people who choose to operate their businesses consistent with their faith.”
A decision in that case is expected by the end of June.
My Statesmanin Austin
Over 5Million Reads Adam Gonzalez at September 24, 2017