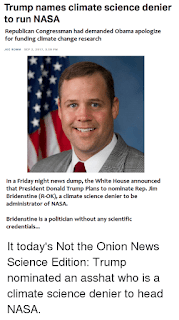 Advocacy groups are now hoping to derail President Donald Trump’s nominee to run NASA over his history of anti-LGBT stances, including criticism of same-sex marriage as "contrary to millennia of human experience" and his description of bathroom protections for transgender people as "lawless federal bullying."

Rep. Jim Bridenstine, a Republican congressman from Oklahoma and former Navy pilot, has drawn praise from the space community for his thoughtfulness on space policy and support for both traditional government programs and new private-sector ventures.

But lesbian, gay, bisexual and transgender advocates are now trying to thwart his nomination based on Bridenstine’s controversial social stances, as they did with one of Trump's nominees for Army secretary.

"It is rather hypocritical to have an individual so entrenched in his idea of 'traditionalism' to be nominated to lead an agency that has for almost 60 years pushed to expand our understanding and knowledge,” said Matt Thorn, executive director of OutServe-SLDN, which represents the LGBT military community. “NASA is rich in diversity. Rep. Bridenstine doesn't have that same view. The Senate should block this nomination."

Thorn said he plans to raise his concerns with senators who will have to approve the nomination, which was announced in late August. The Senate Commerce Committee has not yet scheduled his confirmation hearing.

Bridenstine, whose views on climate change have stirred controversy given NASA's role in climate science, also opposes same-sex marriage, saying that "many studies have shown that both a mother and father are essential for raising successful and healthy children."

And he has criticized the Boy Scouts for allowing LGBT members.

“The left’s agenda is not about tolerance, and it’s not about diversity of thought,” Bridenstine said in 2013. “It’s about presenting a worldview of relativism, where there is no right and wrong, then using the full force of the government to silence opposition and reshape organizations like the Boy Scouts into instruments for social change.”

These instances are all part of a list of Bridenstine’s anti-LGBT actions that GLAAD, formerly the Gay and Lesbian Alliance Against Defamation, is maintaining as part of its so-called Trump Accountability Project.

“The Trump administration has hired unqualified anti-LGBTQ blowhards from Day One and shown they are more concerned with furthering attacks on marginalized communities than selecting leaders who will better our country,” said Sarah Kate Ellis, president of GLAAD.

She expressed concern about Bridenstine leading an agency that has fostered a welcoming workplace for sexual minorities.

“NASA’s Kennedy Space Center released an LGBTQ Pride month video earlier this year featuring LGBTQ NASA employees as well as allies," she noted, using an acronym that includes people who identify as queer. "It is critical for our country’s continued success that NASA employees bring their best selves to work, and that can’t happen when the head of an organization is known first and foremost for being anti-LGBTQ."

The White House declined to address the criticism but a spokesman said in the statement that “the President selects the highest caliber of individuals to fill positions in his Administration. Rep. Bridenstine’s tenure in Congress has been defined by a focus towards space. He has consistently been one of NASA’s strongest advocates in Congress.”

Bridenstine is not the first nominee tapped by Trump to face blowback for his stance on gay rights. Mark Green, a Republican state senator in Tennessee, withdrew from consideration as Army secretary after a torrent of criticism over his statements on gays, Islam, and evolution.

At the time, Green said his "Christian beliefs have been mischaracterized and attacked by a few on the other side of the aisle for political gain." He said he was withdrawing to avoid an unnecessary distraction.

Bridenstine is also facing criticism for his assertions that climate change — a key research area for the space agency — is not caused by humans.

Phil Plait, an astronomer and science blogger, said he opposes the nomination out of concern that Bridenstine could drastically cut NASA’s climate change research if he is confirmed.

“Climate change due to global warming is one of the greatest threats facing us as a species,” Plait wrote in a blog. “The leader of the world’s premier space agency should at the very bare minimum be willing to admit it exists.”

Aside from a few swipes from Florida's senators, the space community has generally supported Bridenstine, despite his lack of a science background compared with past NASA administrators.

Supporters call him highly qualified to lead NASA because of his experience as an aviator, his tenure as executive director of the Tulsa Air and Space Museum and his support for key legislation in the House.

“I would expect him to represent a very thoughtful and pragmatic merger of both traditional and entrepreneurial space,” said John Logsdon, founder of the Space Policy Institute at George Washington University. “I think he thought this through and has come out with a very reasoned position that the two approaches can be combined into something that’s win-win.”

“He’s a highly qualified individual, one I’ve grown to respect while he’s been in Congress,” said former Rep. Robert Walker, a space lobbyist and informal space policy adviser to the White House.