A Victorian church refused to marry a young couple and cancelled their wedding plans because the bride-to-be expressed support for same-sex marriage on Facebook.
The 26-year-old bride and 25-year-old groom were to be married in November at their Presbyterian church, Ebenezer St John's in Ballarat, by minister Steven North.

After a bride posted a comment on Facebook supporting same-sex marriage, a Victorian Minister called the couple to say he can't marry them anymore.

In early August, when the Turnbull government announced the postal survey on same-sex marriage, the bride posted a Facebook status declaring her support for change.
"I know it's something not everyone will agree on and that's fine but this is what I stand for and frankly it doesn't affect [sic] my relationship with [my partner] one bit," she commented.

Days later, the couple was summoned to Mr North's office and were told he would no longer marry them, nor would they be allowed to hold their ceremony at the church.
In a letter to the bride, provided to Fairfax Media, Mr North said the views expressed in the Facebook post had "practical consequences" for the wedding.

"After the pre-marital counselling that you attended and the sermons delivered at Ebenezer on this subject, you must surely appreciate that your commitment to same-sex marriage opposes the teaching of Christ Jesus and the scriptural position practised by the Presbyterian Church of Australia and by me," he wrote.

"This conflict of views has practical consequences in relation to your upcoming wedding.
Minister Steve North, pictured in 2014, refused to officiate the wedding and banned the couple from getting married at his church. 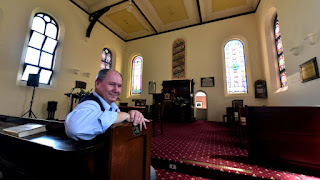 Minister Steve North, pictured in 2014, refused to officiate the wedding and banned the couple from getting married at his church.

"By continuing to officiate it would appear either that I support your views on same-sex marriage or that I am uncaring about this matter. As you know, neither statement is correct.

"Also, if the wedding proceeded in the Ebenezer St John's church buildings, the same inferences could be drawn about the Presbyterian denomination. Such inferences would be wrong."

Fairfax Media has spoken to the couple but has agreed not to name them, in line with their wishes. The couple did not seek media attention about the case – Fairfax Media was informed by a friend of the family.

Ebenezer St John's did not return multiple calls. John Wilson, clerk of assembly at the Presbyterian Church of Victoria, said decisions about officiating marriages were at the discretion of individual ministers. He did not wish to comment further.

But Presbyterian ministers and churchgoers are under clear directions to oppose same-sex marriage. Mr Wilson, who is also moderator-general of the Presbyterian Church of Australia, published a blog post committing the church to the "no" case and calling on attendees to campaign actively.

"There are many powerful voices clamouring to tear down what God declares to be holy. The church must not be silent on this," Mr Wilson wrote.

However, other church sources suggested the Ballarat experience was uncommon. Darren Middleton, convenor of the Church and Nation committee and a Geelong minister, said it was the first such case he had encountered.

"This is a decision for individual ministers to make. My guess is most probably would have let the wedding go ahead," he told Fairfax Media.

"It's not normally a requirement to get married that you subscribe to particular views. I would want to talk to them about their views … but that wouldn't be a bar to them getting married. That's a separate issue in my mind."

David Burke, the moderator of the Presbyterian church in NSW, also said these were matters for individual ministers but his approach would be to talk it through with the couple.

The Ballarat couple had already sent wedding invitations to friends and family but were able to find an alternative, secular venue for their November wedding. The ceremony will be officiated by a retired minister.

In an emotive written response to Mr North, the couple said they would no longer attend Ebenezer St John's church as a result of the minister's decision.

"We feel this decision is absolutely disgraceful and is a disgrace to you and all the church, especially when we have been loyal and valued members of this congregation for 10 years," they wrote
.
"You were made aware from the beginning of our proceedings that we had gay friends and also that people in our wedding party were gay. How could you assume that we would abandon them or degrade them with regards to same-sex marriage?

"We understand we did agree with the teachings of the church in our marriage counselling but just because we agree with that for our own lives, doesn't mean that we have to push those beliefs on others."
The church's decision had caused "a great deal of stress and upset" to both families, the couple wrote.

Michael Koziol is the immigration and legal affairs reporter for the Sydney Morning Herald and The Age, based in Parliament House