Is Puerto Rico Getting Hit Again? Maria on its Way 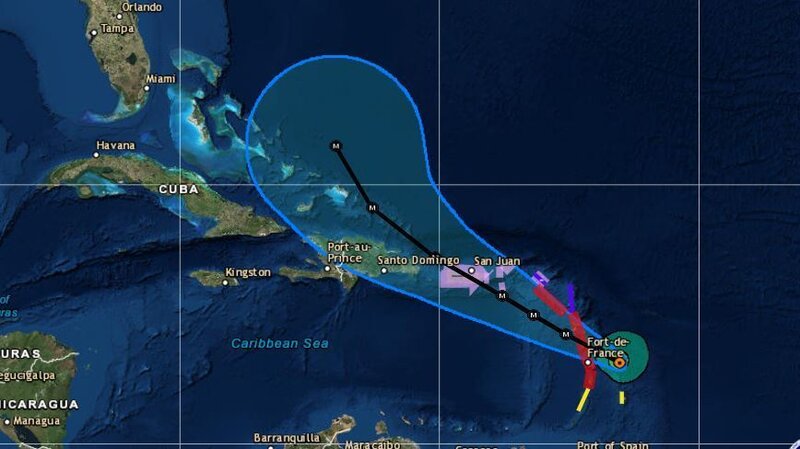 Hurricane Maria is forecast to become a major hurricane — Category 3 or higher — before it hits the Leeward Islands.
National Hurricane Center
Updated at 11:05 a.m. ET
Hurricane Maria, now a Category 3 storm, will hit the Leeward Islands on the edge of the Caribbean Sea on Monday night, forecasters say, threatening areas that are still coping with the devastation brought by Hurricane Irma two weeks ago. Predictions call for it to pass straight over Puerto Rico on Wednesday.
Maria is now classified as a major storm, and "additional rapid strengthening is forecast during the next 48 hours," the National Hurricane Center says.
Maria's maximum winds are currently at 120 mph, after rising from 90 mph earlier Monday; they could reach 140 mph within the next two days, the center said. The storm is heading west-northwest at around 10 mph.
A hurricane warning — meaning hurricane conditions are expected to strike — has been issued for the islands of Guadeloupe, Dominica, St. Kitts, Nevis, Montserrat, St. Lucia and Martinique, as well as the neighboring British and U.S. Virgin Islands. 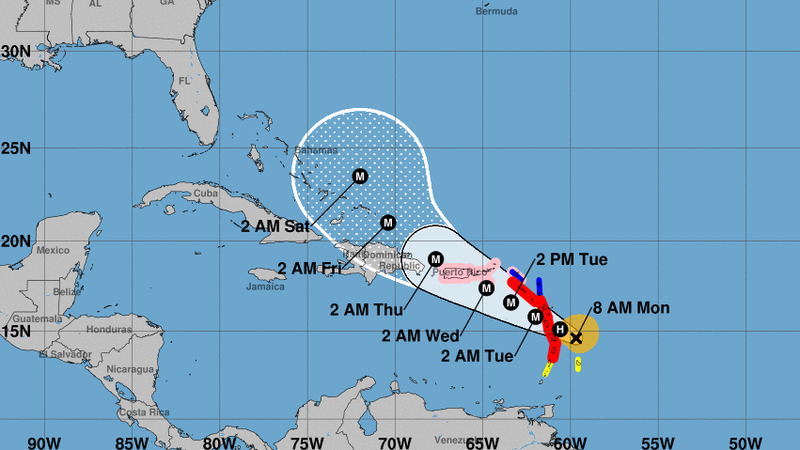 The eye of Hurricane Maria is forecast to pass over the center of Puerto Rico on Wednesday.
National Hurricane Center
A tropical storm warning is in effect for Antigua and Barbuda, Saba, St. Eustatius, St. Martin and Anguilla.
An Air Force Reserve Unit Hurricane Hunter aircraft flew on a route in and around Maria this morning to investigate the storm's development, the hurricane center said.
Unlike Irma, which took a relatively flat westward angle as it raked Barbuda, St. Martin, Cuba and other islands and stormed toward the Florida Keys, Maria is expected to take a sharper northwest tack, passing east of the Turks and Caicos as it heads toward the Bahamas.
Maria puts many of those same areas at risk — including the Virgin Islands, parts of which were hit by Irma's eye wall before that storm veered north. Maria's different approach also means that Puerto Rico and other islands that suffered only glancing blows from Irma could now be directly confronted with hurricane conditions.
On Monday morning, Puerto Rico's emergency officials were meeting to plan their response to Maria.
"The government is prepared," Gov. Ricardo Rosselló said via Facebook, "and we ask of the citizenship preparation, attention, and action."
On the Saffir-Simpson wind scale, a major hurricane designates Category 3 storms and higher — hurricanes with sustained winds of at least 111 mph.
Maria now fits that description and is expected to remain a major hurricane through the weekend. 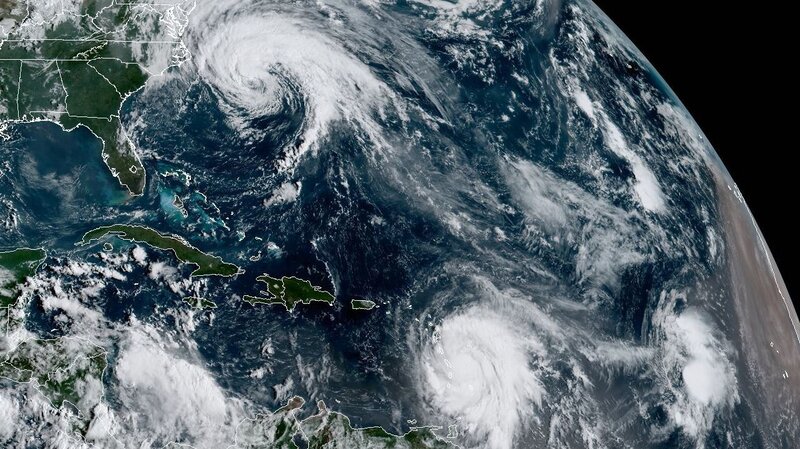 Satellite imagery from NOAA shows Hurricane Jose, along with the U.S. East Coast, and Hurricane Maria, in the Atlantic Ocean near the Leeward Islands. Trailing Maria is Tropical Depression Lee.
CIRA/CSU and NOAA/NESDIS/RAMMB
Maria doesn't have the historic size and strength of Irma, and its hurricane-force winds extend outward up to 15 miles — far short of the 70 miles such winds extended from Irma's center. But the hurricane's storm surge and heavy rains could pose grave threats, from triggering mudslides to frustrating relief and recovery efforts in places where thousands of buildings were heavily damaged by Irma.
Maria "is expected to produce total rain accumulations of 6 to 12 inches," the hurricane center says, "with isolated maximum amounts of 20 inches across the central and southern Leeward Islands, including Puerto Rico and the U.S. and British Virgin Islands, through Wednesday night."
Here are the conditions the National Hurricane Center warns could be brought by a Category 3 storm:
"Well-built framed homes may incur major damage or removal of roof decking and gable ends. Many trees will be snapped or uprooted, blocking numerous roads. Electricity and water will be unavailable for several days to weeks after the storm passes."
Hurricane Jose, which buzzed the Leeward Islands as it moved north and west in Irma's wake last week, has now weakened, with maximum sustained winds of 85 mph. Jose is currently about 280 miles east-southeast of Cape Hatteras, N.C., and it's expected to remain off the East Coast.
With Jose moving north at 9 mph, a tropical storm watch is in effect for areas from Fenwick Island to Sandy Hook; Delaware Bay South; East Rockaway Inlet to Plymouth; Block Island; Martha's Vineyard; and Nantucket.
BILL CHAPPELL
npr.org
Over 5Million Reads Adam Gonzalez at September 18, 2017