The Russians 'Demand' U.S. Give Back The Property 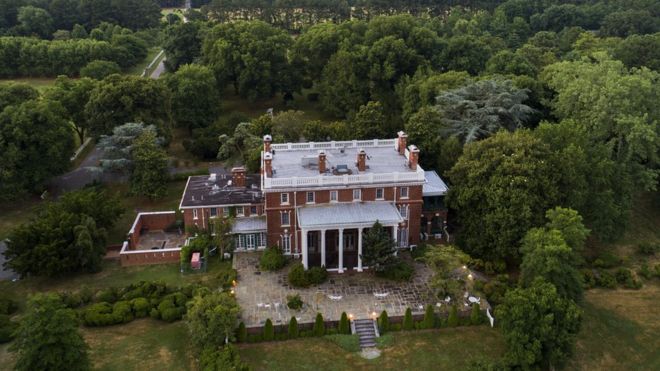 Russia is pressing demands that the US give it access to two diplomatic compounds seized in the US last year.
Kremlin spokesman Dmitry Peskov said it was unacceptable to set preconditions for returning the properties. Foreign Minister Sergei Lavrov described the move as "daylight robbery".
In December the US expelled 35 Russian diplomats and shut the compounds over suspicions of meddling in US elections.
Russian and US officials are due to discuss the issue later on Monday.
US Undersecretary of State Thomas Shannon is hosting Russian Deputy Foreign Minister Sergei Ryabkov in Washington.
The meeting was meant to have been held in June in St Petersburg, but was cancelled after the US government added 38 individuals and organisations to its list of sanctions over Russian activity in Ukraine. Mr Peskov suggested that there was nothing to discuss.
"We consider it absolutely unacceptable to place conditions on the return of diplomatic property, we consider that it must be returned without any conditions and talking," he said.
Mr Lavrov said that this was not the way decent and well-brought-up people behaved.
"How can you seize property which is protected by a bilateral, inter-governmental, ratified document and, to return it, act according to the principle 'what is mine is mine, and what is yours we'll share'?" he said during a visit to Belarus.
Last week Russia said it was considering "specific measures" in retaliation, including the expulsion of 30 US diplomats and seizure of US state property.
Ex-President Barack Obama acted against Russia after US intelligence sources accused Russian state agents of hacking into Democratic Party computers to undermine Hillary Clinton's presidential campaign.


Which compounds were seized?

Luxury Russia resorts in US crosshairs

President Donald Trump's team is under investigation over alleged Russian collusion during last year's presidential campaign. The Kremlin has denied interfering in the election.
The Obama sanctions came on top of existing Western sanctions imposed because of Russia's role in the Ukraine conflict.
At the time Mr Putin refrained from tit-for-tat retaliation - unlike in previous diplomatic spats. Mr Trump had been elected to succeed President Obama just weeks before.
Russia says President Trump presented "no plan to resolve the crisis" when the issue was raised at the G20 meeting in Hamburg on 7 July.
Russia would retaliate if no compromise was reached at the meeting between Mr Ryabkov and Mr Shannon, the Russian newspaper Izvestia reported.
The BBC's Steve Rosenberg in Moscow says Mr Trump is in a Catch-22 situation, cementing his image as a Russian stooge if he returns the properties and further complicating difficult relations with Russia if he does not.