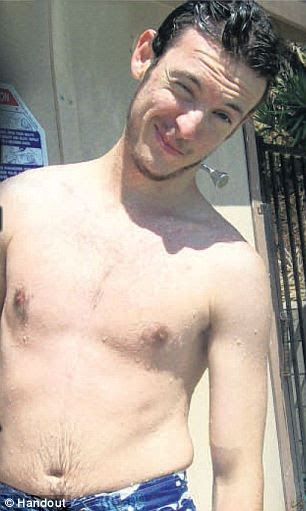 Lack of romance: The local police chief hinted that
James Holmes, seen here during his days as a camp
counselor, may have broken up with someone shortly
before the shooting
The gunman who allegedly killed 12 people during a screening of The Dark Knight Rises in Aurora, Colorado was due to be kicked out of his apartment and may have broken up with a girlfriend in the days before his shooting spree, it has emerged.
James Holmes, 24, had dropped out of the University of Colorado weeks before the attack and was nearing the end of his grace period for staying at the institution's accommodation.
Aurora police chief Daniel Oates also hinted that Holmes had recently gone through a break up and that authorities were investigating the claim.
The new details may give some insight into what pushed Holmes over the edge.
A former classmate from the University of Colorado suggested another cause for the killings, describing Holmes as someone who had lost touch with reality after becoming 'obsessed' with video games.
The classmate told the Daily Mail: 'James was obsessed with computer games and was always playing role-playing games.
'I can’t remember which one but it was something like World of Warcraft, one of those where you compete against people on the internet.
'He did not have much of a life apart from that and doing his work. James seemed like he wanted to be in the game and be one of the characters.
'It seemed that being online was more important to him than real life. He must have lost his sense of reality, how else can you shoot dozens of people you don’t know?'
It is also believed that Holmes was due to be evicted from his apartment. The 24-year-old, who is now in police custody, pulled out of the university weeks before the deadly attack.
Neighbours told TMZ anyone living in the block had to be enrolled at the university otherwise you had 30 days to evacuate.

Email ThisBlogThis!Share to TwitterShare to FacebookShare to Pinterest
Labels: Killing