Bush’s Line of Clothing Fails- How Long Did it Last? 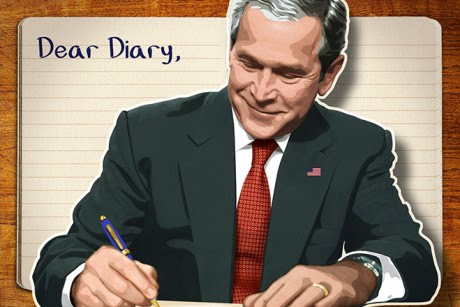 In the early morning of August 4th of last year, a handful of senior executives from Ross Dress for Less, the popular discount department store, flew by private plane to Crawford, Texas, and presented the 43rd president of the United States with a creative business proposal: a signature George W. Bush clothing line. “He loved the idea right away,” said a Ross executive who attended the meeting. “We shook hands on the deal, and then he gave each one of us a bag of Funyuns and told us to follow him out to the garage, where we spent a few hours watching him play Q-Bert.” Later that evening, the executives flew back to California and immediately set to work on the project.
But the “43” clothing line, which was rolled out last month in Ross Dress for Less stores nationwide, failed to meet expectations and was recently pulled from the shelves only three weeks after its debut.
Many people involved in the project are assigning blame to the former president, a well-known creature of comfort, who reportedly insisted that every piece of his clothing line be made, at least in part, with pillows. “We showed him the market research that proved a pillow clothing demographic simply didn’t exist,” said a source who was involved in the project. “He got pretty testy and said, “I don’t care what the evidence says; I know there’s a bunch of ‘pillow clothing consumers’ out there; so go do the research again and find the PCC’s.” The “43” marketing team, fearing dissent would cost them their jobs, subsequently assembled doctored market research that conformed to the former president’s erroneous assumptions. “That’s how you end up with a warehouse full of pillow-padded-ass khakis,” said one Ross executive.
Many people who were involved with the project are still upset with Mr. Bush. “He refused to let go of his ‘man-pillow underwear,’ even though we pointed out that it would essentially just be a cloth diaper,” said one of the lead designers. “His absolute favorite idea was the ‘pillow sweat suit,’” said a Dallas venture capitalist who was pressured by the former president to invest in the project. “Bush ordered the design guys to come up with a pillow sweat suit sample, which he loved and ended up wearing every single day for two months straight. He looked like a 65-year-old version of the Michelin Man.”

Email ThisBlogThis!Share to TwitterShare to FacebookShare to Pinterest
Labels: Commerce, US President