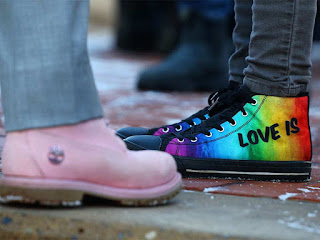 All states have anti-discrimination legislation that prevents businesses discriminating against people based on their sexuality, among other things.
Religious exemptions would allow people — and private businesses — to refuse services for same-sex weddings by objecting to such weddings on religious grounds.
I have written elsewhere about why religious exemptions for same-sex marriage are economically foolhardy.
They are also bad policy: they undermine the very purpose of the anti-discrimination legislation.

The anti-discrimination legislation aims to balance competing "rights". On the one hand, it promotes the right to equality. It also tries to avoid impinging the right to freedom of religion. It is premised on the idea that vulnerable groups require legal protection from persecution.
The most recent example of state anti-discrimination laws is the Victorian Equal Opportunities Act of 2010. Its purpose is to encourage "positive action to eliminate discrimination, sexual harassment, and victimisation". This enhances prior laws by encouraging pro-active action by goods and services providers to eliminate discrimination.
The legislation attempts to balance equality with religious freedom by providing exceptions where discrimination is deemed 'reasonable'. For example, in Victoria, the law allows people to discriminate if it is "reasonably necessary ... to comply with the doctrines, beliefs or principles of their religion". The act also exists alongside Constitutional provisions that prohibit the Commonwealth from either mandating or forbidding, religious observance.
The anti-discrimination legislation thus demonstrates a clear policy goal to eliminate discrimination except in the case of narrowly drawn exceptions. The question is whether religious exemptions for same-sex marriage undermine that policy goal.

Where to draw the line

Religious exemptions for same-sex marriage could apply to three different activities:
Religious groups offering religious services
It is generally accepted that religious entities should be exempt from same-sex marriage laws when performing religious activities. For example, a church minister need not marry a same-sex couple. This is not a live issue in the debate.
Religious groups offering non-religious services to the world at large
Religious groups provide many services to the general public. They might include schools that are open to people of all faiths, properties that are open for rent, or religiously affiliated businesses that provide general services. Superficially, one might argue that providing services for same-sex couples could be at odds with the religious group's beliefs. However, two factors count against that.
First, the religious group has actively decided to offer its services to the world at large. In so doing, it has signaled that it is willing to serve people who do not agree with its religious tenets.

Picking and choosing which people to serve is arbitrary and exclusionary and this is precisely the type of discrimination that anti-discrimination law aims to avoid.

Second, the services being offered are non-religious. For example, leasing a property, baking a cake, and providing flowers are all non-religious services. Thus, providing these services to same-sex weddings does not violate the religious group's beliefs. Thus, it cannot impinge religious freedom.
Private businesses offering services to the world at large
Religious exemptions for private business offering services to the world at large are problematic.
First, the most recent legislation explicitly states that motive is irrelevant when determining whether actions are discriminatory. However, religious exemptions imply that discriminatory conduct is acceptable if the motive was a personal objection to same-sex weddings. This directly contradicts existing legislative language.
Second, the legislation's stated purpose is to eliminate discrimination in areas where discrimination has historically been prevalent. This involves a situation where a powerful group has used that power to harm the victimized group. In part, this is premised on the inherent unfairness in discrimination. In part, it is premised on the real world harm that such discrimination causes.
In this context, LGBTI individuals have historically faced discrimination. This manifests in higher rates of depression and anxiety, according to Beyond Blue. Such discrimination has historically been religiously based.

An anti-discrimination law exists to prevent prejudiced and exclusionary actions. In this context, the laws balance the need for equality with the need to preserve religious freedom.
There is an argument for exempting religious groups from anti-discrimination laws when they perform religious actions.
However, there is no such argument for exempting businesses, or religiously affiliated organizations, when they offer services to the public at large. Such exemptions would undermine the very purpose of an anti-discrimination law.
Mark Humphery-Jenner is associate professor of finance at UNSW Business School.
ABC Australia
Over 5Million Reads Adam Gonzalez at November 14, 2017