Cyd Ziegler from  Outsports reported this story and Iam including it here. This is such a strange world when you deal when dishonest people that try to wing their personalities to what they think others will accept. If you have to declare you are straight followed by profanities and putting the LGBT community down you are a sorry human being and you don't rally know what you are because sexuality is part of us; some of us know who we and first we accept ourselves and then on the same coin we accept others. It is how well we accept us that allow us to accept the ones belonging to another team.
Adam 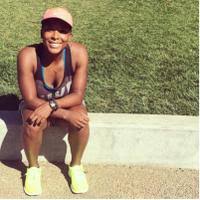 Basketball player and coach Camille LeNoir has filed a lawsuit against New Mexico State University, claiming the school rescinded an offer to coach because she used to be gaybut is now straight.
Sadly, her lawsuit intends to impugn the LGBT community and doesn’t begin to represent the real reasons no fair-minded coaching staff would welcome her with open arms.
LeNoir played basketball for USC before being drafted by the Washington Mystics (she never played for them). She lived for several years in same-sex relationships, but according to the anti-gay video that drove New Mexico State to their decision, she was “delivered” from homosexuality by god.
You can’t make this stuff up. Straight from the video, in which LeNoir discusses her views of homosexuality as a sin:

"When I ended that last relationship, I was still in love with the girl. Nothing was going wrong. And [god] crested upon my heart so much, I couldn't even sleep at night sometimes thinking about it. And it was just really difficult for me to deal with because I was never at peace. Never at peace. And I thank god for that because, like I said earlier, if it wasn't for that I would still be in it. And I would have been completely given over to that. So I've been delivered from it for two years, been going strong for the Lord. Got really serious about my walk after that. That wasn't the only sin I struggled with. I just thought if I got rid of homosexuality, if I got out of that lifestyle, I was good."

OK, fine. She was gay, and god saved her. Certainly there are issues here for someone trying to be a basketball coach, given that she admits herself that there are many lesbian and bisexual women in college basketball.
But she didn’t stop there.

“I knew [homosexuality] was wrong. I knew what Christ did for me. It was just straight-up disobedience on my behalf, not caring about what god thought. I wasn't thinking about my soul or eternity."

So now lesbians and bisexual women are disobedient to god. And there are lots of LGBT women in basketball. What head coach would want this attitude on his team? How would this destructive viewpoint, which she could intend to push on her players, help the Aggies win basketball games?
Oh, there’s more.

"Competition came from satan, not from god. God told us to love each other, to walk in humility. Everything that Jesus preached, from the sermon on the mount, contradicts everything the sports atmosphere promotes. Everything."

So now the very existence of the sport she wants to coach is a descendant of satan.
For LGBT people, she added this clincher:

"If you're in a same-sex relationship, it's not worth losing your soul."

The school reacted in an obvious manner. From the Washington Post:

In court filings, New Mexico State says that LeNoir’s feelings about homosexuality shared in the video “would have had an adverse impact” on her “ability to effectively coach and recruit players who identify as LGBT.”

LeNoir wanted to coach female basketball players, but she said most of them were in a sinful relationship and the very sport they were playing was derived from satan.
And she wonders why she was fired? She’s actually suing the school claiming it’s because she no longer dates women?
In an interesting twist, LeNoir claimed that her being straight was perceived by New Mexico State head coach Mark Trakh as a detriment to recruiting women’s basketball players. Again, from the Washington Post:

She said Trakh told her “the fact that I’m no longer homosexual would affect recruiting.”

For what it’s worth, the interview in which LeNoir said all of these things was with a guy who has called Supreme Court Justice Sonia Sotomayor a Satanist.
Over 5Million Reads Adam Gonzalez at November 09, 2017