Can Anybody Stop Trump from Nuclear Striking North Korea?

Defense Secretary Jim Mattis and Secretary of State Rex Tillerson testify before
the Senate Foreign Relations Committee on Capitol Hill on Monday. (Jonathan Ernst/Reuters)
Short Answer;
No
Long answer:
No one! This is the Presidents power to make war even though the constitution says only Congress can declare war. Then Why would the prsident do it?
Short Answer:
He belongs to the same party that control all congress.
Long Answer:
U.S. most be more discerning of the people they elect because it not only can cause them to save or pay a couple more dollars in taxes but it could cost the whole economy if not death or an early cancer do to low or high levels of radiation exposure.  The Constitution gave the power to amke war and the impeachment carrot and stick to make the President follow the Constitution.
"In testimony Monday, top Trump administration officials confirmed that if President Trump decided to strike North Korea, even with a nuclear weapon, there likely would be no way Congress or anyone else would be able to stop him. For at least some in Congress, that’s a matter of urgent concern."Reuters 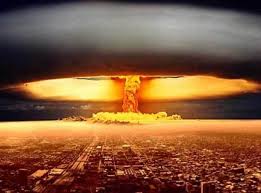