Intelligence Agencies That Don't Answer to Congress or You

Two top U.S. intelligence officials told a Senate committee on Wednesday they could not comment on conversations with President Donald Trump, in answer to questions on whether he tried to pressure them to curtail the government's Russia probe.

"I'm not going to talk about theoreticals and I'm not going to discuss the specifics of any interaction or conversations ... that I may or may not have had with the president of the United States," Admiral Mike Rogers, head of the National Security Agency, said at a Senate Intelligence Committee hearing.

Similarly, Director of National Intelligence Dan Coats said it would be inappropriate for him to discuss his own conversations with the president in a public forum. 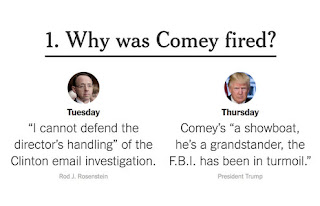 I don't know how you felt about the heads of intelligence officials  refusing to answer non confidential or secret questions to the oversight committee which is in power to help when these guys were confirmed (then they were butter with a hot butter knife on their heads, they also made an oath to answer questions to oversight from congress, particularly the senate). The committee is also in power to investigate the firing of ex FBI Comey as it relates to Russia and the President.

I would like to concentrate not on the ex congressman who was a backer of Trump and was rewarded very kindly for it but about a military officer working for the President of the US, then President Obama.
I'm talking about Admiral Michael Rogers which was working for Obama but had a bad reputation with others in the White House. Maybe those people in the Obama White House felt this Admiral was navigating towards the wrong waters. Actually he wanted to pitch for another team, the incoming Trump team.

While this is going on Trump Tower,  The White House top staff was asking for Obama to fire the Admiral, now they know he was meeting with an incoming President elect opposing everything the current president stood for and people that were possibly being investigated for conversations or ties to Russia. More reasons to get canned. As we know from Obama he sometimes seemed like a procrastinator because he always pondered important questions sometimes to death,  action usually delayed or not taken. For what ever reason in his mind Obama kept him. When Trump came in the Admiral got not the top position he was auditioning for but still a head in the Intelligence field.

These Intelligence heads sitting in front of the senate select committee, keeping in mind the information you just read,  just picture these guys refusing to answer the question wether anybody had ever asked them to drop. go easy an investigation or have they discussed this meeting with the president. Director Coats was asked if he talked to Admiral Rogers before this session and Coats after taking about 9-10 seconds while he pondered which answer to give, remembering he was under oath said he could not answer at that time. What? They had no intention to helping by giving any information. They were literally taking the fifth with out legally taking it since that would have made them suspects of violation something. They had no legal right not to answer. The Senators were confused, except one who was confused which earring this was and he regressed to a year back to the investigation of a server. people say he is just too old, I say retirement if you are too old unless the senate is a club of manly old white guys. Is it?

These Intelligence guys are civil servants working for the American people?? and answering simple questions in relationship to the situation of Michael Flynn-Russia and Firing of Comey.
Obviously they are not responding to the American people and not answering to a committee in the senate with security clearance to hear classified testimony even though the questions did not require answers that were classified.

All the information I have on WaterGate came into mind and I read on my computer information that the intelligence agencies were not involved in Watergate. All the major crimes were committed by the President's lying and cover up including the men around him obstructing justice by protecting and lying for the president. With this particular meeting in the senate I realized this scandal was so much worse than WaterGate in which the President quit so he would not be impeached and probably go to jail. This thing is like an octopus with many legs and ways to hide and blend in with the environment around it.

This scandal has to do with having Russia (GRU group) help *elect a President (wether he asked or not) even though he publicly asked for them (Russians) to break into government and political computers.

Russia *paying at least two of Trump's top people of which one resigned and the most important one,  General Flynn (National Security Counsel to the President) was fired for other reasons;

*reward them by lifting sanctions and undoing what the previous president did to punish the Russians for hacking the DNC computers and others.

At this time Trump has announced his decision to bring back the 38 spies Obama kicked out,(WHY?? he wants more spies coming in? Russia is got plenty here already) and also giving them back the property in New Jersey which they used as headquarters to receive and ship out spies and also spy on the nearby Navy bases. We are saving a bundle by not having to have manpower stationed nearby trying to find out what they were finding out about us.

He has not implemented this decision because a letter he received from congress, mainly Republicans asking him not to reward Russia without getting anything back in return. But maybe he thinks Russia already put out. What other reason can a fair person conclude?
If Obama did this I would not be happy either and he never had any friendly-friendly bromance with Putin like this President have. Doesn't that bothers You? Does it make sense? Has it ever happened before? No is never happened, Not even with a close ally!

I would be totally confused asking for answers if Obama changed his mind about the spies he kicked out and cancelling the sanctions on Russia for invading Ukraine. Trump wants to do all this because?? Better relations? You have better relations with a bully with nukes from a position of strength (learned this lesson in the Cold War), negotiate and do business. Not by opening Trump Hotels and Towers and selling Trump Beef we do this by common exchanges. "The sanctions can come down but you most withdraw from Ukraine". You must stop the Chechen killing and prosecuting anyone they suspect as gay. Them and their families if they are not turn in.  Chechnya to Russia is like Puerto Rico to the US. Different but still Russians and they are sustained by Russia. Putin Commands!! To this moment Putin denies such thing is happening. Chechen's say there are no gays in Chechnya, Putin does nothing, Trump does nothing. Trump won't even mention it.

When you go to sleep at night don't let Chief Michael Rogers come to mind because neither he nor
National Intelligence Director Coats answers to congress it seems and obviously to you nor me. Don't think that you have no secrets because the Intelligence agencies only answer to one man only who says he hates US Intelligence. So I guess they just keep the secrets.

Don't think there are so many military secrets and the President would know all of them.
They know what to feed the President while they want to protect him from the American people. The American people cannot be trusted to know too much, not because what you tell them you also telling the enemy because the enemy already knows most of our secrets only a very few ones which usually remain secret forever because they are never used or they were used and caused embarrassing damage.  Even the President is on a need to know basis. To know is power and our constitution has set up Congress to be a checkpoint for all these people making decisions nobody knows about.

Lets hope that the competent people investigating this super fiasco already has set us back as a nation and world power. If that is the worse of it then we'll be ok but there is so much more on the line.
Lets hope that the senators investigating these issues put country ahead of all else. Politicians are criticized because they are always taking care themselves and their political life but in occasions of national distress wether it was a war or the executive branch which includes the President and these guys who thought they owe no explanations because they work for the 'man.'

WaterGate can teach us so much, particularly what was top secret then but can be found now on many neutral internet sites. We survived decisions to make war coming from the Oval Office, to decisions to obstruct justice because the President could not tell the truth, Sex on the Oval Office, Stupidity and drug use. Now this issue involves the Oval Office and most of the staff in the White House but also a nuclear adversary with grandiose ideas of coming back to a world role they had but will never be the same again, Putin does not know it yet (China does).

Meanwhile he will shadow our ships, planes, coastline to show how reckless he is (he is a bully and can't help himself) and internationally will oppose what we support (Trump or no Trump, Putin does things for his own interests not anybody else's including Russians).