Manning with a New Life Recovering from Government Jailing 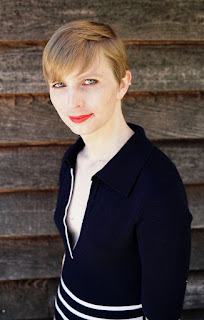 Ever since Chelsea Manning was dumped into a military solitary confinement cell for passing secret information to self-serving Assange of Wikileaks, adamfoxie*blogspot is been posting every time some news squeezed out about her. One did not have to get a degree in space science to know that when a teenager is put in charge of sensitive information to use and without proper safeguards for his state of mind and the information he guarded should not be thrown in solitary confinement without even the benefit of a lawyer. Something was wrong and it was my personal belief that those guarding him and the government in general, had as much if not more responsibility in this embarrassing fiasco for the military and the Bush Administration than the person being blamed totally for it.

If nothing else will tell you what type of human being we had as President, the act of compassion and sincere truthfulness by him pardoning this woman should tell you. A man with fairness that could look at the case of this young transitioning man and see he was not and never had been a threat to this society. President Obama did the right thing and used his powers to pardon like is never been used before: Not to pardon a crooked President by the next President that took his job or money donors caught with their hands not in the cookie jar but with dump trucks emptying banks of their customer's money, which was then replaced again by the whole country.

He pardoned Manning. I have been curious to see how he looks now and here is a picture and a post from Buzzfeed in regards to all the damage Manning did X0 none.
Adam Gonzalez

In the seven years since WikiLeaks published the largest leak of classified documents in history, the federal government has said they caused enormous damage to national security.
But a secret, 107-page report, prepared by a Department of Defense task force and newly obtained by BuzzFeed News, tells a starkly different story: It says the disclosures were largely insignificant and did not cause any real harm to US interests.
Regarding the hundreds of thousands of Iraq-related military documents and State Department cables provided by the Army private Chelsea Manning, the report assessed “with high confidence that disclosure of the Iraq data set will have no direct personal impact on current and former U.S. leadership in Iraq.”
The heavily redacted report also determined that a different set of documents published the same year, relating to the US war in Afghanistan, would not result in “significant impact” to US operations. It did, however, have the potential to cause “serious damage” to “intelligence sources, informants, and the Afghan population,” and US and NATO intelligence collection efforts. The most significant impact of the leaks, the report concluded, would likely be on the lives of “cooperative Afghans, Iraqis, and other foreign interlocutors.”
The June 15, 2011, report, written a year after the leaked documents were published by Wikileaks and an international consortium of news organizations, was obtained by BuzzFeed News in response to an FOIA lawsuit filed in 2015. Classified SECRET/NOFORN, meaning it was not to be shared with foreign nationals, the document was selectively cited by government prosecutors during Manning’s court-martial. Defense lawyers were not allowed to read it. More than half the report was withheld by the government.
To prepare it, more than 20 federal government agencies, including the FBI, NSA, CIA, the Department of State, and the Department of Homeland Security, conducted a line-by-line review of more than 740,000 pages of classified documents “known or believed compromised” by WikiLeaks to assess the damage.
The report goes on to say that the documents the task force reviewed contained details about previously undisclosed civilian casualties in Iraq and Afghanistan, which “could be used by the press or our adversaries to negatively impact support for current operations in the region.”
The task force’s review also found that a so-called, password-protected “insurance file,” which WikiLeaks founder Julian Assange said contained additional classified US documents and which he threatened to publicly release if anything happened to him, likely did not contain any information the task force hadn’t already reviewed.
Manning was released from Fort Leavenworth in May after President Obama commuted her 35-year sentence. Attorney General Jeff Sessions has said the arrest and prosecution of Assange, in connection with these and other documents, is now a “priority” for the Department of Justice.
Over 5.6 Million Reads Adam Gonzalez at June 25, 2017