The Evidence Has Been in On HIV Prevention! U=U (Undetectable=Untransmittable) U=U 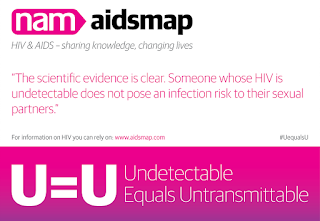 I remember making enemies from some in the HIV community (not in NYC) back on 2009 when I posted information about PrEp (prophylaxis). Nobody wanted to believe it and the government did not want to emphasize it because it did not want to be seen to the religious right that it was encouraging gay sex, safe or not, because that incorrectly was thought as the thrid rail of politics.

PREP keeps an HIV- individual negative even when condoms are not use. We know the truth about condoms and how people lie about using them and how many people become HIV with the same lie ( sorry it must've come off).

Now we have something that works when the HIV+ individual takes the responsibility to use the meds correctly and becomes undetectable ( virus does not show in the blood with one of the standard tests used by different labs).

The responsibility comes back to the HIV individual to become undetectable and be ready to prove it when asked for the latest test (usually a blood test is given every 3 months), which will show if the virus is undetectable and if not it will show the viral load. A nine month or year old test is worthless. It has to be undetectable, not low and current; Otherwise, the parties involved have to go to condoms and or prep.

U=U is a new reality which is not new but now this month some states and city governments have been ready to inform people on this week's HIV prevention day (Wed 27).

I posted this at least a year ago and still, some people did not want to believe it. Why? I can only think that because it takes a little work to be undetectable or to stay HIV-  1. Take the HIV test and if proven positive starts meds as soon as possible, (Untransmissible, when undetectable) if meds are use correctly and your body works with them there will be a point on most people that they will become not able to transmit.
2. Keep your lab and Dr appointments 3. Take the meds as prescribed.

Just last month in London one of the world famous gay bars kept a gay man from coming in because on a search for weapons they found a bottle of HIV meds.

Instead of congrats buddy! He was shame and kept from coming in, hopefully, he is able to financially recoup for this stupid mistake.

You can make this HIV prevention strategy work for you by taking your HIV treatment as prescribed and seeing your healthcare provider regularly. Your ongoing healthcare should include blood tests to check your viral load and ensure that it remains undetectable.
Wait until you have had at least two consecutive undetectable viral load test results before depending on this strategy.
To make this strategy keep working for you, adherence is key. If you have trouble taking your HIV medications every day, don't be afraid to ask for help from your doctor, pharmacist and/or peer counselor.
If your viral load does not become undetectable or if it becomes detectable again, this can increase the risk of transmission. In that case, you may need to use other prevention strategies, such as condoms, until your viral load becomes undetectable.

What About Other STIs?

Maintaining an undetectable viral load can prevent HIV transmission but it does not prevent the transmission of other sexually transmitted infections (STIs), such as chlamydia, gonorrhea, and syphilis. However, condoms can reduce the risk of many STIs, so you might want to use HIV treatment and condoms.

What Is an Undetectable Viral Load?

What are the Benefits of Having an Undetectable Viral Load?

We now know that it's good for your health: Starting treatment as soon as possible after becoming HIV positive decreases a person's risk of developing serious illnesses and allows people to live long, healthy lives. Having an undetectable viral load can also prevent HIV transmission.

How Do I Know if I'm Undetectable?

How Can I Know That Maintaining an Undetectable Viral Load Prevents the Sexual Transmission of HIV?

A significant body of research has been accumulating over the years. In 2016, the final findings from two large international studies -- PARTNER and HPTN 052 -- were published. These studies showed that not a single HIV transmission occurred between serodiscordant sex partners when the partner living with HIV was on treatment and had an undetectable viral load.
As Dr. Myron Cohen, the principal investigator of HPTN 052, stated: "We now have 10,000 person years (of follow-up) with zero transmissions from people who are suppressed."
As a result, we can confidently say that when a person taking antiretroviral treatment maintains an undetectable viral load, they do not transmit HIV to their sex partners.
The Prevention Access Campaign -- an international coalition of HIV advocates, activists and researchers who are spreading the word that undetectable HIV is untransmittable -- has turned this scientific evidence into a simple message: U=U. Researchers from all the major treatment as prevention studies have endorsedit.

What Does U=U Mean to You?

I spent 21 years stigmatizing myself while trying to provide a positive front in my work with people living with HIV. I feel somewhat hypocritical because while fighting against stigma and discrimination, I perceived HIV as making me damaged goods, dirty and less than. I lived in fear of transmitting HIV and built walls to keep others out.
U=U has impacted me to my very soul. I am now aware that I am much more than a virus. I can look forward to meaningful relationships with others and opening my heart.
-- Tom, Bonny River, NB
I am an HIV-positive woman. I have known for a long time, through consultations with HIV specialists, that I was not able to transmit the virus. This has given me a sense of relief when having condomless sex. The scientific proof makes me feel optimistic about stigma changing. It is an enormous move forward in normalizing people living with HIV, as we will no longer be marginalized. Through education, the public will respond to HIV in a more supportive manner and the quality of life for me and the HIV community will improve.
-- Anonymous, Montreal
It took us too long to disseminate the findings of the PARTNER study. We were not simply cautious in our messaging regarding this transformative research, we were silent. Why did it take people with HIV and the organizations that represent us so long to get the U=U message out? Some thoughts: deep-rooted stigma against people with HIV; paternalism in our organizations and the alignment of ASOs with an under-informed government agenda, held in place through diminishing funding; and a disengaged, less scientifically literate National PHA movement that seems prepared to settle for the status quo in HIV.
-- Darien, Toronto
This research is wonderful but many people are not aware that U=U. We need more education and we need to deal with the social stigma of HIV before the positive impacts of U=U can be widely felt. Despite all the research, the stigma is still there -- not just in serodiscordant relationships but also in society.
I am in a long-term relationship and I've been undetectable for three years, but many women with HIV are fearful of being criminalized for not disclosing their HIV status. We still have lots of work to do before we can fully enjoy the benefits of U=U.
-- Madhuri, Calgary
[Ed's note: U=U has not yet had an impact on HIV laws in Canada. A person living with HIV in Canada still has a legal duty to disclose their HIV status to a sex partner before: (1) sex (vaginal or anal) without a condom; and (2) sex (vaginal or anal) with a condom unless you have a low viral load (less than 1,500 copies/ml). It is not clear how the law applies to oral sex.]
As an activist and as a person living with HIV who is privileged to have access to life-saving treatments and good healthcare, U=U is something I embrace and celebrate. U=U has presented people with HIV with even more reason to demand universal access to treatment and healthcare. As part of the North American U=U Steering Committee, I have connected with peers and activists across the globe to advance this important message locally and globally. As a member of the Canadian Positive People Network, it is my hope that our network can further explore how we can spread awareness of U=U -- among poz folks, within the HIV sector, and with public health, government and the general public.
-- Christian Hui, Toronto
All of us here at CATIE, and indeed around the world, are celebrating the most significant development in the HIV world since the advent of effective combination therapy 20 years ago. The "fabulousness" of this news cannot be overstated. With or without a condom, if you're undetectable you won't pass along HIV! This is an absolute game-changer and those who live with HIV can proudly share this information.
-- Laurie Edmiston, Executive Director of CATIE