FL. GOP Rep.Wore Gas Mask On Vote To Fight The Virus to Make Fun of It~He Is Sick With Corona Now 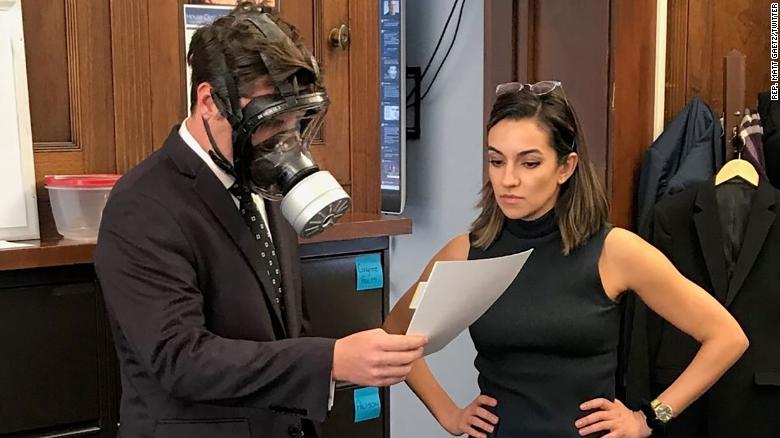 By Caroline Kelly, CNN
Florida Republican Rep. Matt Gaetz donned a gas mask on March 4 while he voted on a bill that would dedicate billions of dollars to combating coronavirus as concerns rise over the spread of the disease.
"Reviewing the coronavirus supplemental appropriation and preparing to go vote," Gaetz tweeted with a picture of himself wearing a gas mask while looking at a piece of paper before the vote.
Gaetz later wore the mask onto the House floor, according to a photo tweeted by Rep. Jim Himes, a Connecticut Democrat.
You won't believe the shoes Matt Gaetz is wearing today. #FloridaMan pic.twitter.com/VmFN7t0fjq — Jim Himes (@jahimes) March 4, 2020
Just days after the stunt, Gaetz announced on Twitter on March 9 that he will self-quarantine after coming into contact with an individual at the recent Conservative Political Action Conference who had been diagnosed with the coronavirus.
"While the Congressman is not experiencing symptoms, he received testing today and expects results soon," a tweet posted to his account said. "Under doctor's usual precautionary recommendations, he'll remain self-quarantined until the 14-day period expires this week."
The gas mask picture from Gaetz, a longstanding defender of President Donald Trump, follows an announcement earlier on March 4 of the 11th US death from the disease as the global toll of coronavirus deaths continues to climb into the thousands. Health officials have urged Americans to stop buying masks out of concern of a shortage for health care workers, and Vice President Mike Pence, whose office is in charge of coronavirus-related messaging, reiterated the point during a press briefing earlier Wednesday, saying that "there is no need for Americans to buy masks" to protect themselves.
Gaetz ultimately voted in support of the bill, which passed 415 to 2, with 13 members not voting. It provides $7.8 billion in appropriations to address the outbreak of coronavirus as well as an additional $500 million to fund a telehealth program in an effort to help expand access to health services for seniors.
But Gaetz said later that while he backed the bill "because we must have resources now to prevent further spread," he "didn't feel good about it" due to the lack of spending cuts to offset the spend.
"$8Billion+ in spending without offsets," he tweeted. "The next generation will have to pay for their own pandemics....and ours too...with interest."
Some House Democrats dismissed Gaetz's antics on Twitter.
"You won't believe the shoes Matt Gaetz is wearing today. #FloridaMan," Himes said in his tweet.
California Rep. John Garamendi also weighed in on the scene, asking the cast of the Netflix reality makeover show "Queer Eye" to "plz help."
Earlier on Wednesday, Gaetz accused Democrats of using the coronavirus to score political points against the President.
"Coronavirus does not belong to a political party and it should not be a political tool," he said on Fox News.
Gaetz pointed to "the most relevant factual information" as what would "help us defeat this virus, not a bunch of Democrats trying to use it to try to weaponize politics against the President."
Over 5.6 Million Reads Adam Gonzalez at March 13, 2020