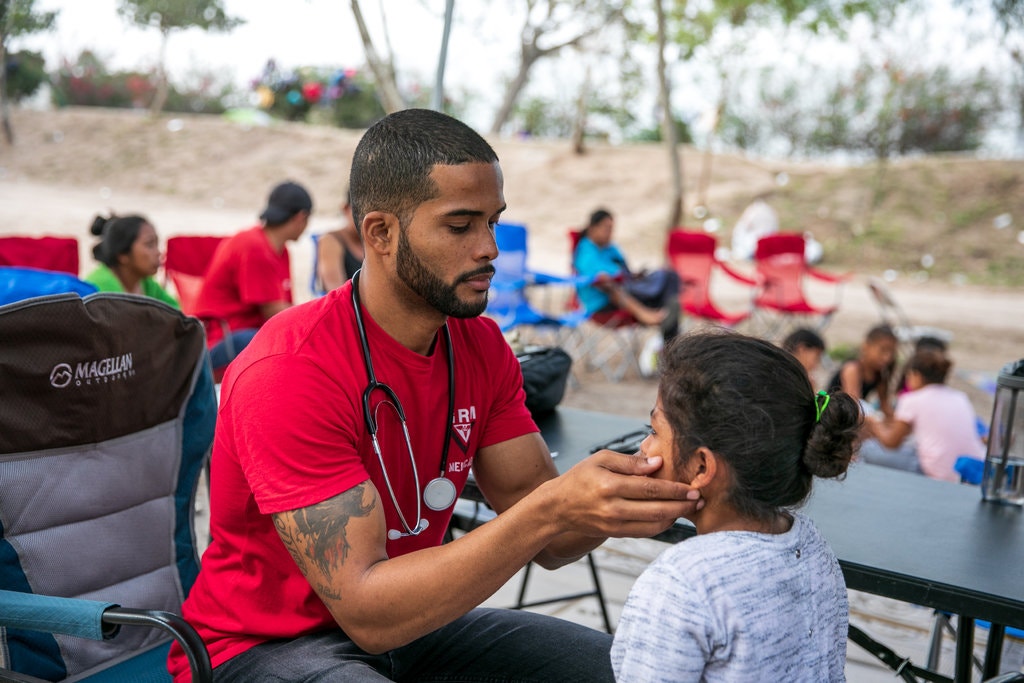 Dr. Dairon Elisondo Rojas, a doctor from Cuba, treated patients in a migrant camp in Matamoros, Mexico.Credit...Ilana Panich-Linesman for The New York Times

By Miriam Jordan and Mitchell Ferman
The New York Times

MATAMOROS, Mexico — Under a canopy on the edge of a squalid encampment, a young physician named Dairon Elisondo Rojas holds office hours every day from 10 to 4.

On a recent afternoon, he saw children with diarrhea, colds, and asthma, among other ailments. Some he examined, treated and sent on their way with cough or cold medicine. For those who required special care, like a boy with a broken leg, Dr. Elisondo arranged a transfer to the local Mexican hospital.

Dr. Elisondo, 28, a native of Cuba, is the sole full-time doctor in the teeming tent city that has sprouted at the base of a bridge that connects the Mexican city of Matamoros to the United States. More than 2,500 migrants have squatted in the camp while their cases wind their way through immigration court in Brownsville, Texas.

“This is perfect, perfect,” Dr. Elisondo said in Spanish about the arrangement. “It’s what I know. It’s what I do best.”
So perfect he has not taken a day off since starting work in late October.

Like the migrants under his care, the doctor is stranded in Mexico by the Trump administration’s “Remain in Mexico” policy, under which asylum seekers who show up at the border are only allowed to enter the United States for court appearances.

He could be stuck in Matamoros for several more months, waiting for an answer on his immigration case.

Dr. Elizondo, who has a specialty in critical care, has experience working in challenging environments thanks to Cuba’s medical-training program, which dispatches newly minted doctors on missions to impoverished allied countries.

After medical school, Dr. Elisondo was posted for nearly three years to a government clinic in Venezuela. With that country’s economy reeling, he witnessed close-up the suffering wrought by a shortage of medicine and food. He was recalled back home after he became a vocal critic of the government of Nicolás Maduro.

“The government brought me back to Cuba, and that had consequences,” he said.

In his home country, he said, he was banned from practicing medicine and harassed by the police. Feeling persecuted and endangered, he and his girlfriend scrounged up enough to pay for travel to the United States to request asylum. They journeyed more than a month by plane, boat, and bus until they reached the southwestern border in mid-August. 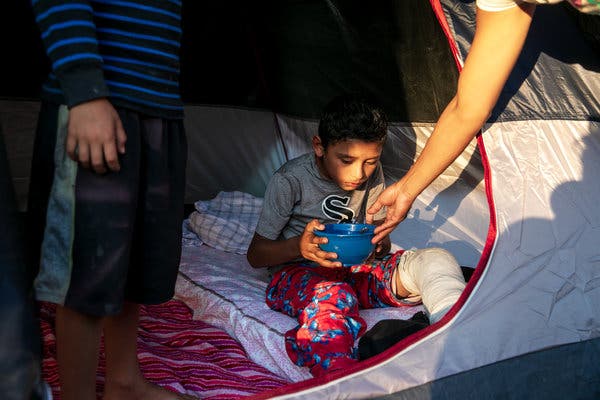 ImageAngel, 10, broke his left leg playing soccer in the camp and was treated by Dr. Elisondo.

While Cubans for decades were allowed under a special policy to remain in the United States if they were able to make it there by land or sea, that welcome ended in the final days of the Obama administration. Cubans, who once may have traveled to Florida, now are subject to the same stringent immigration policies applied to other asylum seekers on the southwestern border.

“We arrived, presented ourselves and they sent us right back to Mexico,” Dr. Elisondo said of United States border officials.

Dr. Elisondo and his girlfriend got an apartment with other Cuban asylum applicants, and he found a job on the assembly line of a plant in Matamoros that churns out cases for cosmetics, he said.

Then one day, as he passed the ever-growing migrant camp near the international bridge, he spotted a big banner tied to a fence inscribed with the words “Medical” and “Médico.” Several migrants were talking to a person with a stethoscope dangling from her neck. It was a pop-up clinic opened in October by Global Response Management, an international nonprofit organization whose volunteer doctors, nurses, and medics have been deployed to places such as Iraq, Yemen, and Syria.

Dr. Elisondo said he was a doctor. Could he help?

“I thought, ‘If he’s licensed and credentialed, how could I not use him?’” said Helen Perry, the group’s executive director. She asked for his medical diploma and other documents, which he sent by WhatsApp.

After a two-day trial, said Ms. Perry, an acute-care nurse practitioner, the decision had been made. “Everyone agreed, Dairon is fabulous.”
Exposure to the elements, overcrowding, and lack of sanitation — there are few showers and the portable latrines are foul — have created conditions for illness to spread in the sprawling camp. Yet many migrants fear to venture far outside the camp, even to seek medical care because so many people have been victims of crime.

“Thank God for the Cuban doctor,” said Luis, a Honduran migrant whose family has been living in the encampment since September.

Luis, who like other migrants at the camp did not want his last name published, said he had recently taken his 9-year-old daughter to Dr. Elisondo for a chronic cough. The physician determined she had bronchitis and successfully treated her.

Inside a gray tent lay Angel, a 10-year-old from Honduras who had fractured his left leg playing soccer. Dr. Elisondo wrapped it in a splint and sent him to a hospital, where the boy got a cast that stretched above the knee. On Angel’s return, he found a set of miniature racecars awaiting him — a gift from the camp doctor to cheer him up.

On a typical day, Dr. Elisondo and a rotating roster of American volunteer health workers see about 50 patients. In addition to the camp’s residents, they serve another 1,000 migrants living elsewhere in Matamoros.

A handful of migrants with serious medical conditions, including a toddler with third-degree burns, have been allowed to enter the United States for care. 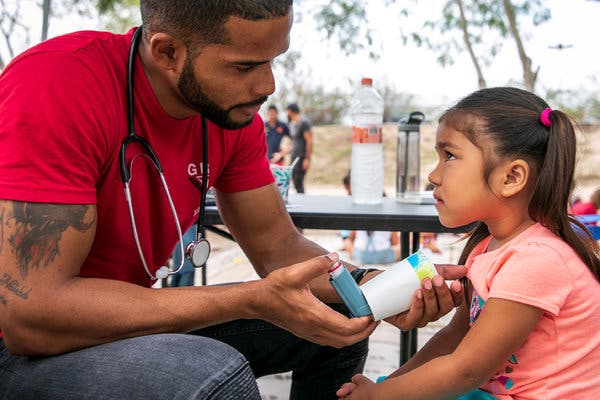 Dr. Elizondo treated Estephanie, 4, for asthma at the camp. Credit...Ilana Panich-Linsman for The New York Times

Dr. Elisondo, who sports a neatly trimmed beard and a red T-shirt emblazoned with the group’s logo, has stabilized people who had epileptic seizures, appendicitis and heart attacks. But patients with upper-respiratory-tract infections, pneumonia and skin conditions such as scabies represent the largest share of his caseload.

With winter at hand, the clinic had been administering about 20 flu shots daily, until a shortage struck.

On a warm December day, Dr. Elisondo screened patients outside the trailer, with a bottle of hand sanitizer sitting next to his laptop.

Children on a rug in the open-air waiting area entertained themselves by leafing through “The Very Hungry Caterpillar,” filling in coloring books and playing with toys.

Stephanie, a 4-year-old girl from Honduras in pigtails, had asthma, her mother reported, but she had not been treated for it since arriving at the camp. Dr. Elisondo listened to her breathing and determined she needed treatment.

To ensure that she received the appropriate dosage of medication, Dr. Elisondo fashioned a spacer for her inhaler out of a paper cup. Medical-grade spacers are expensive; the paper cup served the same purpose.

“Look at me right here, O.K.?” he told the little girl, and then sprayed.

A 3-year-old boy in a striped T-shirt got one of the few remaining flu vaccines. Sitting in his father’s lap, he grimaced when Dr. Elisondo poked his right arm, only to break into a smile when the doctor stuck a ladybug Band-Aid on it.

Dr. Elisondo said he could not predict how long it would take an immigration judge in the United States to rule on his case.

He crossed the bridge to Brownsville for his first court appearance on Dec. 4. His next one is not until late February.

Though he has no lawyer, he hopes to win his asylum case on his own, learn English and begin practicing medicine on the other side of the bridge, in the United States.

Ms. Perry said that if his plans did not pan out, he need not worry. “He doesn’t know this,” she said, “but I am going to send him to other places in the world. He is highly trained.”

Miriam Jordan is a national immigration correspondent. She reports from a grassroots perspective on the impact of immigration policy. She has been a reporter in Mexico, Israel, Hong Kong, India, and Brazil. @mirjordan