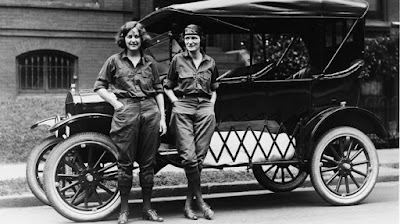 The B in LGBTQ doesn’t stand for brands! It stands for bisexual. Or breakfast cereal mascot hentai. One of the two. Anyway, the point is that brands are not part of the LGBTQ community, no matter how many times they include us in their advertising material. I thought we all knew this? But after seeing the glowing media coverage of a new gay car commercial, I guess we need to go over it again.
The ad at hand is a new spot for the Renault Clio, which hit YouTube last Thursday, and which might as well be called “Riding in This One Particular Car with Girls.” Two women, who meet as kids, are shown bonding, making out, and falling in love in various iterations of the car model, only to be kept apart by familial homophobia and the fact that they live in different countries. (One’s French, the other’s British.) The French one marries a dude, and the British one’s like, “No…” but then the French one’s like, “Non…” She leaves her husband and drives to see her redheaded childhood sweetheart. The two are then shown, happily coupled with a daughter of their own, getting out of a Renault Clio. Gay rights! Or is it?

A number of media outlets have rushed to celebrate the commercial, with The Independent calling it “heartwarming” and Business Insider dubbing it a “two-minute masterpiece.” Fast Company goes so far as to hail it as “a remarkable feat,” praising the advert’s portrayal of a “completely normalized same-sex relationship.” It’s not hard to understand this impulse, given the dearth of queer representation in mainstream media. LGBTQ characters made up less than 10 percent of all series regulars featured in scripted broadcast programming during the 2018-19 season, per GLAAD’s most recent “Where We Are” report on TV representation, and only a quarter of LGBTQ characters on broadcast networks were lesbians. The film industry similarly lags, featuring few queer women characters in wide-release, studio-supported movies, despite the recent successes of projects like Booksmart, Annihilation, Blockers, and The Favourite.
A lesbian love story, however brief, can be a nice change of pace in a media landscape dominated by straight romance and the male gaze. But the story is still selling a car. It is now more profitable for Renault to include our narratives in their ads than it is to exclude us. Why celebrate that?

It’s also a trite narrative: The two women in the commercial couldn’t have just been queer, dated other women, eventually gotten together, broken up, gotten together, broken up, and bought land upstate to communally raise three kids with nine of their closest gal pals. No! One of them had to have a homophobic father. There had to be some sort of traumatic coming-out moment.

The story operates entirely within the confines of heterosexuality, and ends with the two women forming a nuclear family of their own just like their parents and their parents before them! Commercial imagery featuring LGBTQ people often strives to uphold traditional narratives around gender and heterosexuality by emphasizing how “normal” we can be, going back to the earliest TV ads featuring gay men and lesbians in the ‘90s. (The two dudes in this Guinness ad?

They’re just like mom and dad, except they’re both boys! How nonthreatening and delightful for me, Mrs. Heterosexual Beer Consumer.) It’s a dynamic author Sarah Schulman critiqued more than 20 years ago: “In today’s marketplace, they mean almost nothing,” she wrote in a passage from 1998’s Stagestruck. “[The] commodification of our experiences has now made it safe for us to be represented and have that fact reinforce the superiority of heterosexuality.”
That said if you want to like the car commercial… Watch the stupid car commercial! It’s literally not a big deal, so just don’t try to make it one. We know this is just Renault’s long con to steal back Subaru’s lesbian consumer base.
Over 5Million Reads Adam Gonzalez at December 06, 2019