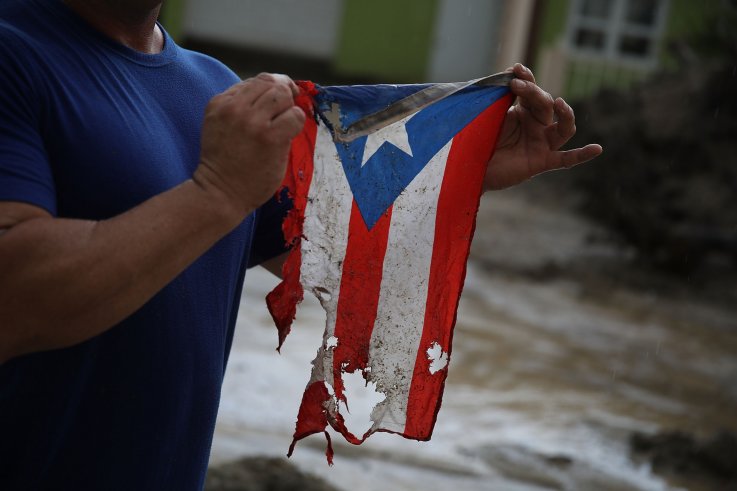 Thursday marked more than three months since HUD was supposed to begin the process of allowing Puerto Rico to apply for one of the withheld aid batches—about $10 billion—and 22 months since the funds were signed into law.

Jose Javier Santana holds a Puerto Rican flag he found on the ground after Hurricane Maria passed through on October 6, 2017, in Utuado, Puerto Rico.
Rep. David Price (D-NC) accused HUD of "singling out Puerto Rico once again" with the second tranche of delayed money, which was on the brink of being delivered to Puerto Rico until the department in recent weeks suddenly chose not to approve the island nation's grant agreement. An aide for Price, who chairs an appropriations subcommittee that oversees HUD, said they've been notified by HUD that it signed the grant agreements for each state receiving the same tranche of funds—minus the U.S. Virgin Islands and Puerto Rico.

Price said he's been offered no explanation by HUD as to why the grant agreements for the two U.S. territories were not signed, despite HUD giving their action plans the green light. The move has left him to wonder whether the White House may have played a role. The HUD officials who testified to Price in October said they would allow Puerto Rico to apply for the first tranche of illegally delayed aid "very soon" and claimed the decision to withhold it was based on HUD's overall concerns about corruption—not a directive from Secretary Ben Carson.

After the publication of this story, HUD provided the following statement, attributed to an unnamed department spokesman. The department noted that Puerto Rico has only spent a fraction of the funds they already have access to.

"The Administration has taken historic action to help the people of Puerto Rico recover from Hurricane Maria. Given the Puerto Rican government's history of financial mismanagement, corruption, and other abuses; we must ensure that any HUD assistance provided helps those on the island who need it the most. This process must be handled in a prudent manner with strong financial controls to mitigate the risk to Federal taxpayers. In addition, it is worth noting that Puerto Rico already has access to $1.5 billion and has so far only spent $5.8 million—less than one percent of those funds."

President Donald Trump (L), holds an African American History Month listening session attended by the nominee to lead the Department of Housing and Urban Development (HUD) Ben Carson (R) and other officials in the Roosevelt Room of the White House on February 1, 2017, in Washington, D.C.

HUD did not address Newsweek's questions about who determined the two tranches of aid should be withheld or why Puerto Rico and the Virgin Islands' grant agreements were not signed. The White House did not respond for comment.

"They're asking for it, wouldn't you say?" Price told Newsweek in an interview on the prospects of defunding a portion of the agency. He chairs the appropriations subcommittee responsible for overseeing HUD.

"What the legal options might be, we need to consider. But what we do know, appropriations bills do offer leverage," Price said. "The best approach is not to have this problem. But if you do have it, you write a deadline into the bill. If that's ignored, then you start thinking about more drastic moves, like withholding funds for something HUD wants."

In October, the HUD officials would only go so far as to say Puerto Rico could begin applying for the funds "very soon."

"The other day, I had a mayor call me and ask, 'could we sue the federal government for their inefficiency, bureaucracy, and ineffectiveness?'" Cruz claimed.

The corruption argument by HUD and Republicans is moot, Democrats like Price have said because Congress placed safeguards that require the money to be monitored by HUD as it's dispersed. HUD's Office of Inspector General also pledged to conduct audits as additional oversight.

"I think all of us who are scratching our heads over this are wondering whether maybe all this traces back to some kind of order from the top or desire to please the president. We just don't know," Price said.

Throughout his tenure, Trump has made false claims about the U.S. territory, such as inflating the amount of hurricane relief aid and refusing to acknowledge the high death toll of Hurricane Maria. He's also feuded with Puerto Rican leaders, like Cruz and ousted Governor Ricardo Roselló.

And Price and his Democratic colleagues aren't the only ones who are casting doubts on HUD's motives.

She doesn't like the way HUD handles its disaster block grant program to begin with, much less when the department singles out Puerto Rico.

Cruz said she feels the entire system is designed to help big businesses and powerful people profit from the misfortunes of those whose communities were devastated by tragedy, rather than operate as a system that aims to weed out corruption. She said local governments are required to choose from a certain list of contractors or companies to complete the major projects that they outline in action plans for HUD, which are required in order to receive the federal grants.

"For anyone from the federal government to be talking about corruption with the most corrupt president of the United States sitting on a chair an inch away from being impeached," Cruz added, "it's really the pot calling the kettle black."

Prior arguments show that HUD contends that recent events are why, in part, they need to keep a close eye on such a large amount of money. The department maintains financial monitors on the island and has reiterated its concerns over Puerto Rico's recent political unrest with Roselló's ouster and a debt crisis that has for years handicapped the local government.

Cruz doesn't buy HUD's concerns, however, citing the safeguards that Congress put in place to have the aid routinely monitored for fraud or waste.

When aid is withheld from an island nation that's been devastated by hurricane after hurricane year after year, Cruz explained, those who don't live in Puerto Rico fail to realize the real-world effects that will have on local communities. And when HUD officials continue to offer few or no explanations, she feels it only hinders their preparation for the next Hurricane Maria.

"People die because of the federal government's and Trump's ineffectiveness," the mayor said. "People continue to die."

The graphic below, provided by Statista, shows that Puerto Rico is fourth worse affected globally in terms of fatalities caused by extreme weather.