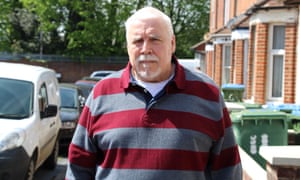 LONDON (Thomson Reuters Foundation) - A bisexual British veteran who was kicked out of the navy because of his sexuality is set to become the first of many to get his medals back and an apology from the British military for the way he was treated.

Joe Ousalice, 68, had served for almost 18 years as a radio operator when he was discharged in 1993

after a court-martial found him guilty of “conduct prejudicial to good order and naval discipline”.

He was stripped of his medals - some earned for duty in Northern Ireland and the Falklands war - and of his long service benefits. It was illegal for gay and lesbian people to be in the armed forces until 2000.

“I was made to feel like I was disgusting,” Ousalice said in a statement on Tuesday.

After nearly 30 years of legal battles seeking the return of his medals, an out-of-court decision was announced this week and Ousalice will have his medals returned at a ceremony next week.

“I want other LGBT veterans to know they’re not alone, and that we all deserve the same recognition,” said Ousalice, who lives alone in Southampton on the south coast of England.

Following Ousalice’s campaign, the Ministry of Defense announced plans to restore medals to all affected LGBT military personnel ahead of the 20th anniversary of ending the ban that will be marked in January next year.

The move is one of several by British governments taking measures to atone for past discrimination against LGBT people. In Scotland, gay men convicted under homophobic laws were officially pardoned in October.

“Today is a victory for equality and human rights and an important recognition of the hurt caused,” said Emma Norton, head of legal casework at human rights organization Liberty which backed Ousalice’s court appeal.

In addition to restoring his medals, the Ministry of Defense (MoD) has offered what is thought to be the first official apology to LGBT military personnel like Ousalice.

“Back in 1993, because of his sexuality, Mr. Ousalice was treated in a way that would not be acceptable today and for that, we apologize,” the MoD said in a statement

“We accept our policy in respect of serving homosexuals in the military was wrong, discriminatory and unjust to the individuals involved.”
Over 5Million Reads Adam Gonzalez at December 13, 2019