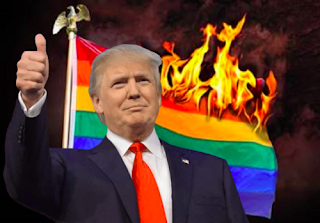 By Gwen Aviles
NBC
President Donald Trump’s campaign has introduced new LGBTQ Pride merchandise through its website, sparking criticism that the offerings appear to be at odds with his administration’s policy track record.
The merchandise, which was first reported by NewNowNext, includes a white T-shirt that reads “Make America Great Again” in rainbow letters. The product description reads, “Show your support for the LGBT community and the 45th President with this exclusive Make America Great Again T-Shirt.” The site is also selling a rainbow "Make America Great Again" hat, which is currently sold out.
“Trump selling ‘Pride’ t-shirts when his very administration attacks LGBTQ people on the daily,” one person tweeted. “It’s like we are all in the damn Twilight Zone.”

Trump selling "Pride" shirts when his very administration attacks LGBTQ people on the DAILY & Zimmerman counter-suing the family that he destroyed by gun violence. . it

Several policy measures criticized as anti-LGBTQ have either been proposed or enacted under the Trump administration, including the president’s contentious transgender military policy, which bars transgender personnel from serving openly and denies them access to gender-affirming medical care, and the administration's proposed rule to expand the exemption that allows religiously affiliated businesses to ignore anti-discrimination laws.
Many of Trump’s advisers and appointees have been criticized for their actions and statements against LGBTQ people. Just last month, NBC News reported that Clarence Mason Weaver, a right-wing pundit who called being gay “an abomination,” was appointed as an advisory board member to the “Black Voices for Trump” campaign coalition. This is not the first time the Trump campaign, which did not respond to NBC News’ request for comment, has been criticized as “hypocritical” for selling LGBTQ merchandise. Earlier this year, during LGBTQ Pride month, the campaign unveiled another white T-shirt with a rainbow flag that read “LGBTQ for Trump."
“Trump — who banned trans troops, is against LGBT employment protections, wants ppl to be able to turn away LGBT customers, & is denying citizenship to kids of US gay couples born out of wedlock — is selling LGBTQ for Trump shirts for Pride,” BuzzFeed journalist David Mack wrote on Twitter at the time.

Trump — who banned trans troops, is against LGBT employment protections, wants ppl to be able to turn away LGBT customers, & is denying citizenship to kids of US gay couples born out of wedlock — is selling LGBTQ for Trump shirts for Pride http://www.newnownext.com/donald-trump-selling-pride-t-shirts/05/2019/ … via @NewNowNext 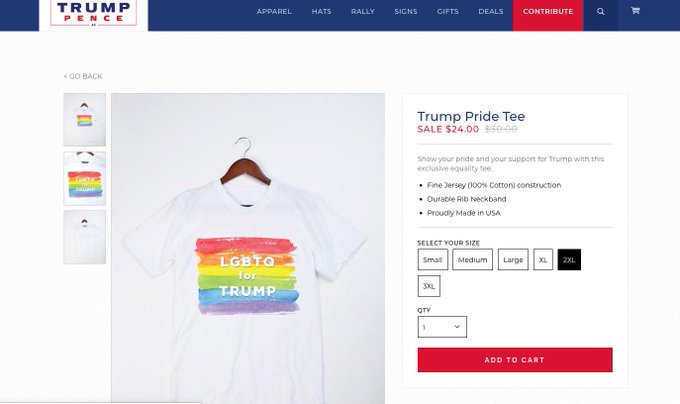 457 people are talking about this
Lesbian, gay, bisexual, transgender and queer voters have been a reliable part of the Democratic voting base. In 2016, 78 percent of LGBTQ voters reported voting for Hillary Clinton, and in 2018, 82 percent of LGBTQ voters reported backing a Democratic candidatefor the U.S. House of Representatives, according to exit polls.
Some LGBTQ voters do identify as part of Trump’s base, including some members of the Log Cabin Republicans, a gay conservative group that faced internal turmoil earlier this year after some of its leadership endorsed Trump's re-election.
Charles Moran, the national spokesperson for the Log Cabin's Republican, said that LGBTQ merchandise in Trump's campaign store is nothing new and that he's had some form of it since Trump started running, but he says the fact that the "Make American Great Again" Pride hat in the store is currently sold out is what's telling.
"We're seeing at the Log Cabin Republicans that it's not just traditional Republicans who are gravitating towards Trump, but disaffected Democrats and Independents who are heartened by the president's approach," Moran told NBC News. "Gays are not necessarily voting in a bloc like they have in the past," Moran added that the president has a track record of advocating for the LGBTQ community through his words and policy, citing the administration's February announcement of a campaign to decriminalize homosexuality globally and last week's announcement that the U.S. government will start a national HIV-prevention program that will distribute free HIV pre-exposure prophylaxis medication as examples of such advocacy.
"Trump has thrown out the old playbook, and, unlike previous Republican administrations, doesn't use the LGBTQ community as a wedge issue," Moran said.