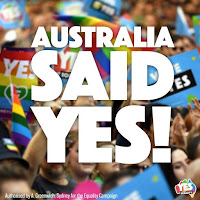 One of Australia's leading wedding magazines is shutting down after it refused to feature same-sex couples. BBC
Luke and Carla Burrell, founders of White magazine, said advertisers had abandoned them in droves.
The Christian couple said they made the choice because they had "no desire to create a social, political or legal war".
Australia legalised gay marriage in December last year after the country overwhelmingly voted in favour of it.
In a farewell post on its website, the magazine's founders said they had been targeted by "a flood of judgement," and that couples they featured had been sent online abuse.
"White Magazine has always been a secular publication, but as its publishers, we are Christian. We have no agenda but to love," they wrote.
"Like many people, we have had to reflect on our beliefs," the founders wrote. "It's a long and continuing journey."
Photographer Lara Hotz, who shot three covers for the magazine, told media in August that it wasn't including gay couples - though it hadn't said so publically.
Ms Hotz, who is in a same-sex marriage herself, said the magazine's decision made her feel "extremely hurt".
"It appears they are happy to take money, content and photographs from LGBTQI advertisers and contributors, but are yet to support and represent us in the same way as heterosexual couples are represented in the magazine," radio programme Hack quoted her as saying.
The photographer said she did not want to force the magazine to include same-sex weddings, but felt its stance should be made transparent.
Skip Facebook post by White Magazine


A Facebook post by White drew a mixed response, with some praising the founders for sticking to their principles, and others branding them homophobes who did not deserve to be in business.
"It doesn't seem to me that your agenda is just to love, it seems like your agenda is just to love straight people," wrote Ruth Parker.
Another commenter, Cynthia McKenzie, said she felt the magazine's freedom of speech had been impeded, writing: "Unfortunately today if you have faith and don't agree with same-sex marriage, you can't run your own business the way you want."
White magazine is not the first enterprise to shut after a diversity row. Last month, an Oregon bakery that had refused to make a wedding cake for a lesbian couple closed down for good.
Over 5.6 Million Reads Adam Gonzalez at November 19, 2018