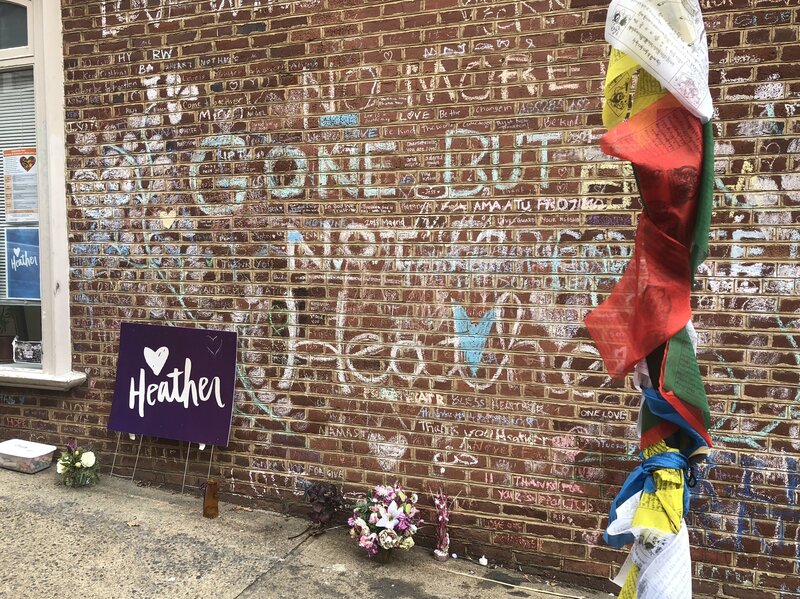 Jury selection begins today in the trial of the man accused of ramming his car through a crowd of people protesting a white supremacist rally in Charlottesville, Va. James Alex Fields, Jr. is charged with first-degree murder in the death of Heather Heyer, and faces additional charges of malicious wounding.
One of those wounded was Star Peterson. When the August 12, 2017 "Unite the Right" rally erupted in violence, Peterson was with a multi-racial group of counter-protesters marching downtown. She didn't see the gray Dodge Challenger coming from behind, accelerating down a hill on a narrow one-way street.
"I just heard three bumps," she recalls. "Two of them were his left tires going over my leg." 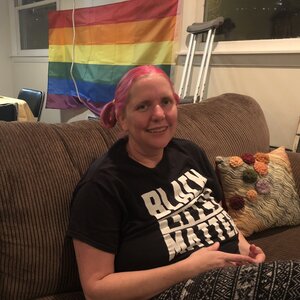 Star Peterson was injured when a car rammed into a crowd in August, 2017, during a white supremacist rally in Charlottesville, Va.
Debbie Elliott/NPR
Sporting neon-pink pigtails and a Black Lives Matter t-shirt, 38-year-old Peterson now uses a cane for walking. She's had five surgeries and has not been able to go back to work due to the severity of her injuries.
"He broke both of my legs, two parts of my spine, and one rib and then [I] also had a pretty big laceration that had to be sewn up," she says.
Peterson plans to testify at the trial.
"I need to do something for Heather other than just lay flowers at her grave and if I can be part of prosecuting the person who killed her then that's something I can do for her memory," says Peterson.
Authorities say Fields, a 21-year old white man from Ohio, deliberately plowed his car into the anti-racist demonstration and say he had earlier participated in the rally with chants promoting white supremacy.
Fields have pleaded not guilty. His court-appointed defense attorney, Denise Lunsford, declined to comment on the case.
Lunsford has sought to have the trial moved outside of Charlottesville, arguing the impact of the event on local residents and widespread publicity will prevent Fields from getting a fair and reasonable trial. 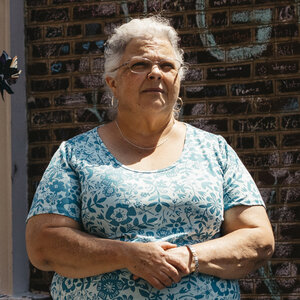 Charlottesville Circuit Court Judge Richard E. Moore has taken the defense motion for a change of venue under advisement. He says if an impartial jury cannot be found from the large jury pool of 360 people, he will revisit the matter.
Key evidence from prosecutors will include graphic videos shared on social media by witnesses.
"I feel like the court's going to be watching my daughter die again, over and over and over," says Susan Bro, Heather Heyer's mother.
She's ready to get the trial over with and hopes selecting a jury won't prove to be an issue.
We've got to figure out how to make Charlottesville more than just a hashtag again, and more than just a blip on the racist history of this country.
Don Gathers, co-founder of the Charlottesville chapter of Black Lives Matter
"I want them to have a completely fair and impartial trial," she says. "I don't want to have to redo this 15 times."
She says she feels like the process could go on for years if there are appeals. But no matter what happens, she wants to see the case through.
"I have never hated Mr. Fields because I felt like he's in the hands of justice now," says Bro. "But I do pray that justice prevails here."
The broader community is also looking for justice as it seeks to reconcile the forces that made Charlottesville shorthand for racial strife.
"Where we go from here I don't I don't know," says Don Gathers, co-founder of the local chapter of Black Lives Matter. 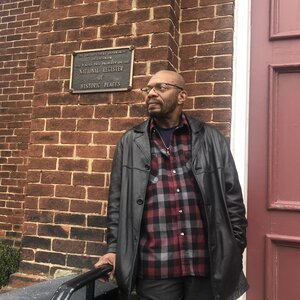 Don Gathers, a deacon at historic First Baptist Church and co-founder of the Charlottesville chapter of Black Lives Matter.
Debbie Elliott/NPR
"We've got to figure out how to make Charlottesville more than just a hash tag again, and more than just a blip on the racist history of this country," he says.
Gathers has served on several citizen advisory panels — including the city's Blue Ribbon Commission on Race, Memorials, and Public Spaces.
He says there's been an awakening that this is the focus of a new civil rights battle.
"We've reached a point now that we've got to stop having the conversations about race and start talking about the real elephant in the room which is racism."
Addressing systemic racism is a goal of the Charlottesville Area Community Foundation. It's raised over a million dollars for the Heal Charlottesville Fund.
"Part of what we heard from our community that was needed for the healing was opportunities to act, opportunities to really be good and honest about our collective history," says Foundation President Brennan Gould. "And also to start to act in ways that that will help address the impacts of that history."
The foundation has funded an initiative to increase teacher diversity for instance and to improve security in the Jewish Community. Gould says the ongoing focus is helping injured survivors with myriad needs including rent, utilities, medical bills, and counseling.
"It seemed like the world had moved on in a way," she says. "And yet people were still very much living and dealing with the consequence of that tragedy."
One way the fund helps survivors is through a grant to social worker Matthew Christensen at Partner for Mental Health. He serves as a navigator, helping people deal with things like filling out disability applications or finding accessible housing.
"It's a lot of whatever they need," says Christensen.
Right now they need help coping with the trial, which he says could be re-traumatizing. But Christensen says the trial itself is an opportunity for accountability.
"For the perpetrator to face real consequences because that's something that people struggle with — not seeing the organizers like Jason Kessler or Richard Spencer face real consequences legally for organizing this rally."
Four rally participants have been convicted related to the violence, but rally organizers have not been charged with any crime. The organizers face a civil lawsuit, however, brought by Charlottesville residents who sued under the Ku Klux Klan Act of 1871.
Survivor Star Peterson is bracing for her testimony in Fields' trial. But she thinks justice will be elusive.
"There can't really be justice," Peterson says. "We can't undo what's been done. We can't bring Heather back."
If convicted on the Virginia charges, Fields could be sentenced up to life in prison.
He's also been indicted on federal hate crime charges, which allow for the death penalty.
Over 5.6 Million Reads Adam Gonzalez at November 27, 2018