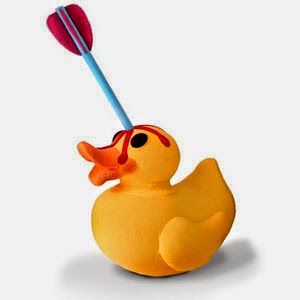 Second episode of new season ratings slide continues in Week 2
I find it repulsing even writing or posting about this ‘dude’ but in  case you have not heard he has lost more ratings than if the ones with the time and big mouths that started making noise would have been ignore.
It is clear to A&E that the writing is on the wall and when you bring people to make you money an act that’s not to contain insults to the other people that watch the show and a community in general. They have churches, chucky cheeses’ and big barns in which they can preach their interpretation of the bible until everyone becomes blue in  their faces. A TV making them super rich was not the deal and is not the platform. So I give you this news with gusto and was waiting for the trend to start so I wouldn’t have to swallow my words.
Last week’s depressed ratings for the season premiere of “Duck Dynasty” might not have been a fluke.
The second episode of the season dropped steeply from the season premiere, shedding nearly 2 million viewers.
Wednesday’s “Duck Dynasty” drew 6.7 million total viewers — off considerably from last week’s premiere haul of 8.5 million total viewers.
While this wouldn’t be the first “Duck Dynasty” season to suffer a ratings dip in its second episode, Wednesday’s numbers do indicate a troubling trend for the A&E show. Ratings for last week’s season premiere dropped 28 percent from the Season 4 premiere in August, which amassed a record-setting 11.8 million total viewers during a period when networks were heavy into repeat mode.
Wednesday’s ratings were also the lowest-rated episode since the Christmas-themed Season 2 finale in December 2012, which brought in 6.5 million total viewers.
The current season’s premiere also came in below the Season 3 premiere last February, which garnered 8.6 million total viewers.
Last week’s season premiere was the first “Duck Dynasty” episode to air since controversy erupted over homophobic comments series star Phil Robertson made to GQ. During an interview with the magazine, Robertson — who describes himself as a product of the sex, drugs and rock ‘n’ roll lifestyle who turned to God after hitting rock bottom — said that gay people “won’t inherit the kingdom of God” and likened them to “drunks” and “terrorists.”
Adam Gonzalez
Robertson was briefly suspended from the show, but quickly reinstated in the wake of fan backlash
Over 5.6 Million Reads Adam Gonzalez at January 26, 2014

Email ThisBlogThis!Share to TwitterShare to FacebookShare to Pinterest
Labels: Homophobia/Entertainment