A cast of 17 transgender people have taken center stage in an inspiring new ad series for Barneys New York.
The campaign, shot by legendary photographer Bruce Weber, features individuals who have experienced immense challenges while transitioning genders.
Katie Hill, for example, was born a boy and was the first transgender student to graduate from her Oklahoma High School in 2012.
Scroll down for video 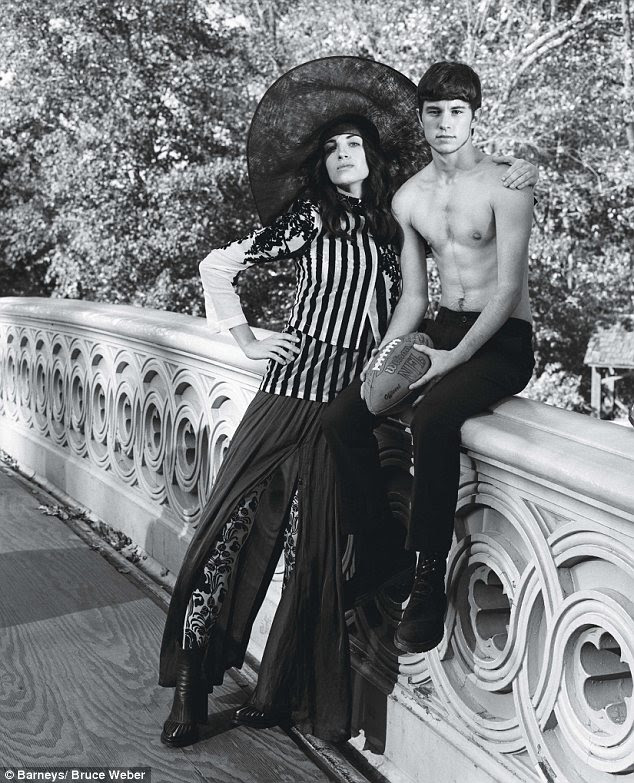 Sticking together: Katie Hill (left) and Arin Andrew (right) are an ex-couple that met at a transgender support group
After announcing her ambitions of becoming a woman to her fellow high school students, Miss Hill says that she was 'bullied and spat on.'
She was homeschooled for a year and then returned to school 'because I decided I didn’t want to be treated like a victim or a freak,' told Barneys' The Window blog.
With patience, Miss Hill educated her classmates on her state of mind.
'Everybody had been pretty ignorant about the subject of transgender, but they listened and after a while some of the kids who’d been bullying me and making fun of me became my friends. Eventually some of them revealed themselves about being trans people,' she said.
Miss Hill legally became a woman at the age of 16 and underwent gender reassignment surgery at the age of 18 – a procedure that was paid for by an anonymous financial donor who had seen her story on television.
Another model named Maxine Neu, a 20-year-old from Hamburg, was also born a boy. While she always felt female inside, Miss Neu has only lived as a woman for the last year-and-a-half. 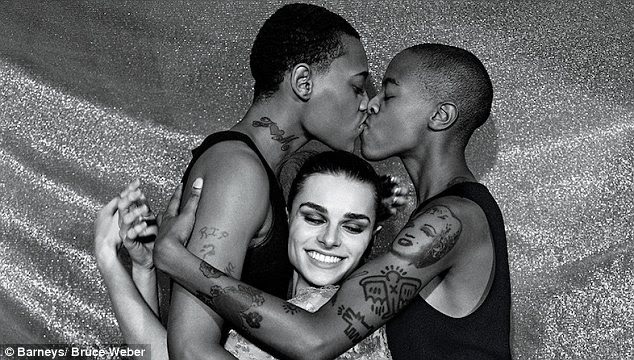 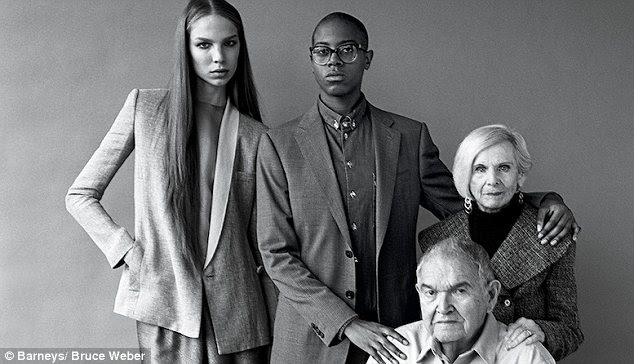 Family support: Model Ryley Pogensky, a New York-based blogger (center), poses with his grandparents Leonard and Gloria (both right), and fellow model Valentijn (left)
She is still transitioning into her new life, she says, and has not yet begun to seriously date as a woman.
'I don’t have a boyfriend. I like to cuddle and watch a movie but I don’t want to go beyond that yet. Maybe I need to protect myself. What’s happening to me is not about sex—it’s about identity. Nobody wants to get hurt. I have time,' she told the retailer.
Ahya Taylor was born a boy too. She tells Barneys that she 'began transitioning when I was a freshman in college. The process was very public, but it didn’t matter! I was doing what I had to do. It was a matter of psychological survival.'
She currently attends Wayne State University as a harp performance major.
But music is just one element of her dream career – she also plans to go into social work.
'Art and people are my passion and I want to contribute in the best way I can,’ she explained. ‘I want to be a catalyst for the change and uplifting of my community.'
Meet the transgender stars behind Barneys' new campaign 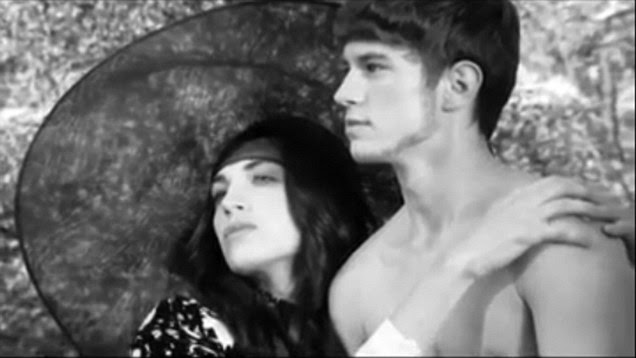 In harmony: Dezjorn Gauthier (left), from Milwaukee sits with Ahya Taylor (right), pose in Central Park wearing Balenciaga
The campaign's conception was overseen by Barneys' creative director, Dennis Freedman, who told WWD that his casting decision had ‘a lot to do with the realization that such extraordinary progress has been made in the last few years for the lesbian, gay and bisexual community, but it’s striking how the transgender community has been left behind’ and it is ‘disturbing and upsetting to see that.’
Mr Weber also created a series of short films that will premiere on Barneys’ website.
The photographer told the paper: ‘I hope that my photographs and films of these 17 new friends, who are transgender men and women, convey the respect I have for them and how I stand in awe of their courage to face the world.’
On February 11 Barneys will donate 10per cent of sales from its flagship stores and website to two partnering organizations: The National Center for Transgender Equality, and the Lesbian, Gay, Bisexual and Transgender Community Center.

Email ThisBlogThis!Share to TwitterShare to FacebookShare to Pinterest
Labels: Transgender