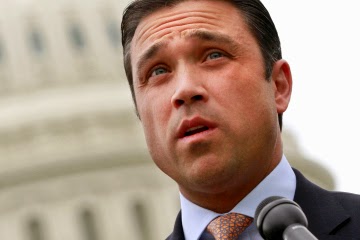 U.S. Rep. Michael Grimm has never been shy about promoting himself as a tough guy.
When he ran for Congress in 2009, he highlighted his service in the Marines and as an undercover FBI agent. After his election, he brushed off allegations that he’d once brandished a gun during an early-morning altercation at a New York City nightclub by saying he was armed but hadn’t verbally threatened to kill anyone.
“That’s not my personality. I don’t need to speak that way,” he told a writer for the New Yorker. “A guy with a gun who knows how to use it doesn’t need to say anything.”
The Staten Island Republican’s temperament is at the forefront again after he was caught on camera threatening a television news reporter.
The confrontation occurred on a balcony in the Capitol following the president’s State of the Union address Tuesday night. Grimm walked out of an interview with the New York City cable news station NY1 when reporter Michael Scotto tried to throw in a last question about a long-running FBI investigation into his campaign finances.
After Scotto finished his report, Grimm stormed back, leaned into Scotto and said, “Let me be clear to you. If you ever do that to me again, I’ll throw you off this (expletive) balcony.”
Scotto protested, saying he was asking “a valid question.”
Grimm glanced at the camera, leaned in again and said, “No. No. You’re not man enough. You’re not man enough. I’ll break you in half. Like a boy.”
Asked about it soon afterward, Grimm was defiant. In a statement, he said he felt Scotto had been disrespectful and unprofessional.
But after a morning of heavy public criticism, he phoned Scotto to apologize.
“He said he overreacted,” Scotto told The Associated Press. “He said that the behavior that he showed wasn’t him. So I accepted the apology.”
Later Wednesday, Grimm told a group of reporters that he would probably be getting an earful from his mother.
“The bottom line is, sometimes I wear my emotions on my sleeve,” he said. “I was wrong. It shouldn’t have happened.”
Allegations of a hot-temper have dogged Grimm.
In 2000, a New York City police officer filed a lawsuit against Grimm over an incident a year earlier at a nightclub in Queens. Gordon Williams, who was moonlighting as a club bouncer, said Grimm had gotten into a fight, then returned at 2:30 a.m. carrying a gun and “carrying on like a madman.”
“He’s screaming, ‘I’m gonna ... kill him,’” Williams told writer Evan Ratliff for a 2011 New Yorker article. “So I said to him, ‘Who are you?’ He put the gun back in his waist and said, ‘I’m a ... F.B.I. agent, ain’t nobody gonna threaten me.’”
Williams claimed that Grimm left, then returned again at 4 a.m. with another FBI agent and a group of police officers and harassed patrons in a search for the men he’d fought.
Williams’ lawsuit was dropped. In a 2011 interview with the Staten Island Advance, Grimm said the Justice Department had investigated and exonerated him.
Grimm said he had been at the club on a first date when he was attacked by the woman’s estranged husband and three other men. As Grimm told it, he had defended himself, leaving three of his four assailants “on the floor.”
He told the Advance and Ratliff that he did take out his gun, but only to move it from an ankle holster to his waistband, and that he returned to the club with police officers and an FBI agent because Williams had refused to call 911.
Scotto prompted Grimm’s fury Tuesday night by asking him about an FBI probe of the congressman’s fundraising during his first campaign for Congress in 2009 and 2010.
During that race, Grimm has acknowledged receiving $250,000 to $300,000 in contributions from followers of an Israeli rabbi, Yoshiyahu Yosef Pinto. Some members of Pinto’s congregation subsequently claimed that they made tens of thousands of dollars in illegal contributions, including gifts passed through straw donors.
Grimm has denied knowledge of any improprieties, and the FBI hasn’t accused him of any wrongdoing. The Israeli businessman who had served as Grimm’s liaison to Pinto’s followers, Ofer Biton, pleaded guilty in August to an immigration fraud charge.
Three days after that guilty plea, the FBI filed a sealed criminal complaint accusing a Houston woman who had been romantically involved with Grimm of using straw donors to make illegal campaign contributions.
In that case, made public this month, Diana Durand was accused of funneling at least $10,000 to Grimm’s campaign by passing them through friends who agreed to have the donations listed under their names.
Durand’s lawyer, Stuart Kaplan, acknowledged in a phone interview Wednesday that she and Grimm had a “very, very close relationship” but said he had seen nothing to suggest she arranged the donations with the congressman’s knowledge.
He said Durand had never been involved in politics before, was ignorant of the law and “truly innocent” in her motivations.
Grimm’s treatment of the reporter drew condemnations from New York City Mayor Bill de Blasio, a Democrat.
“A leader can’t do that. And if the leader does that, those in power, those in the leadership structure have to speak out,” he said. “So I would hope that the House leadership says very strongly this is unacceptable behavior.”
A spokesman for House Speaker John Boehner, Michael Steel, said “Rep. Grimm has apologized, and the speaker believes that was appropriate.”

You’ve probably seen the video of Congressman Michael Grimm threatening, among things, to “break” NY1 reporter Michael Scotto “in half ... like a boy.” While the men quickly made up, a pressing question remains: Did Grimm humiliate Scotto because he is gay?
It is well known among people who know and work with him that Scotto is gay. “Within the station community it’s pretty well known,” one colleague told Gawker. The 35-year-old political reporter didn’t ask Grimm about anything pertaining to sexuality, so it’s unclear, based only on the video, why Grimm issued a series of insults aimed at questioning Scotto’s masculinity—a common weapon of homophobes seeking to torment and marginalize gay men.
And the point here was to torment Scotto. “You’re not man enough,” Grimm seethes. “You’re not man enough.” And embarrass him, too. You can’t see it in the video, but his colleagues and other reporters were watching the entire thing from a few feet away.
We don’t know whether Grimm was aware of Scotto’s sexuality, and his office didn’t acknowledge our repeated attempts to contact the congressman. The men know each well enough, though. “He and Congressman Grimm have worked together professionally for a while,” NY1’s Washington bureau chief Jennifer Babich told Gawker. “But this is the first time [Grimm has] said anything like this.” (Babich added that the men “have had several interviews” together.) At the very least, they were known quantities to each other.
People close to Scotto weren’t as sure, though. “It looked to me like old-school assholedom that had nothing to do with Michael being gay,” argued a friend of his. “I’d be surprised if Grimm knew.” Babich, his supervisor, added: “I don’t think that was a factor in the confrontation.” Other reporters who know Scotto, all of whom asked not to be identified, shared a similar sentiment.
Yet it remains undeniably true that Grimm abased Scotto in a manner that’s especially toxic toward gay men. It’s also true that, as a career reporter, Scotto has a professional interest in staying out of the story—and staying in the good graces of politicians such as Grimm, on whom NY1 depends for interviews. Everyone involved has an interest in moving on.
They shouldn’t. Grimm’s rushed apology glossed over the very real words that Grimm deployed to keep people like Scotto in their place. If a 35-year-old gay reporter ensconced in the chambers of Congress remains vulnerable to this grade of verbal abuse, this degree of humiliation, then where, exactly, is he safe?
Over 5.6 Million Reads Adam Gonzalez at January 30, 2014