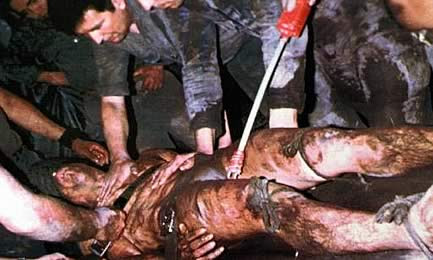 Between 1933 and 1945 when the Nazis came to power in Germany an estimated 100,000 homosexual men were arrested, of whom 50,000 were sentenced under criminal law Paragraph 175. Most served prison sentences. An estimated 5,000 to 15,000 were sent to concentration camps.
Those homosexuals who survived found liberation by British and American soldiers of short duration. As criminals under Germany's notorious Paragraph 175 penal code they were sent back to prison. Many died there.
The purging of Berlin gay bars began in February 1933. There were 90 such clubs in a city where sex, following World War l, was a commodity to barter. The Nazis prohibited sex publications and manuals, banned organized homophile groups, and they also outlawed abortions.
In May, the Berlin Nazi Youth made an organized attack of the Magnus Hirschfeld Institute of Sex Research. Its collection of 20,000 books, 5,000 photographs and sex artifacts were burned. Kurt Hiller, director, was sent to a concentration camp. Hirschfeld founder, and an advocate for Paragraph 175 repeal, was out of the country. He died in France.

Treatment of homosexuals in concentration camps was brutal. Gays "ranked" below
political prisoners, criminals, asocials, Roma - gypsies - and Jehovah Witnesses.
Gad Beck, who died last year at age 88, was what the 1935 Nuremberg Jewish Law classified as a "mischling" - half Jew, half gentile. This status allowed him to live openly longer than most full Jews. He was also a courageous underground resistance fighter, at one point even daring to try to rescue his Jewish lover from certain concentration camp death.
Beck stole a German Youth uniform, entered the Auschwitz camp, and requested the release of his friend for a nonexistent defense project. Beck's pretense worked.
His friend was granted escorted exit; but then told Beck with much sorrow and a strong sense of family loyalty that he could not leave his parents behind. Returning to Auschwitz, he and his family perished.
An account by another Holocaust survivor, Pierre Seel, details life for gay men during Nazi control. He relates participating in his local homophile community in the town of Mulhouse. When the Nazis took control his name was found on a list of local homosexuals. He was ordered to the police station, obeying the directive to protect his family from any retaliation.
Upon arriving at the police station he says that he and other homosexuals were repeatedly beaten. Any who resisted the SS Gestapo brutes had their fingernails torn out. Others had their bowels punctured, causing them to bleed profusely. After his arrest he was sent to the concentration camp at Schirmeck.
There, Seel shares that during a morning roll-call, the Nazi commander announced a public execution. A man was brought out, and Seel recognized his face. It was that of his eighteen-year-old lover from Mulhouse. The Nazi guards then stripped the clothes off his lover, placed a metal bucket over his head, board banged it repeatedly, then released trained German Shepherd dogs to maul and tear him to death.
Rudolf Brazda, believed to be the last surviving person who was sent to a Nazi concentration camp because of his homosexuality, died in France in August 2011, aged 98. Brazda was sent to Buchenwald in August 1942 and held there as Pink Triangle # 7952, until its liberation by U.S. forces in 1945.
Brazda, who settled in France after the war, was in 2010 awarded the Legion of Honour, for his varied roles in speaking out about Nazi treatment of homosexuals and France's shameful role in deporting its Jews and homosexuals.
In 1994, 17 years before Brazda's death, Germany rescinded its anti-gay Paragraph 175.
Charles@pridesource.com
pridesource.com
Over 5Million Reads Adam Gonzalez at January 10, 2014