Tick,Tick,Tick Homosexuality The Ticking Bomb for the Church

Former friar: Mark Dowd, who is now a journalist, said research for his 2001 Channel 4 documentary Queer and Catholic had suggested at least half of people attracted into seminaries in the priesthood are gay 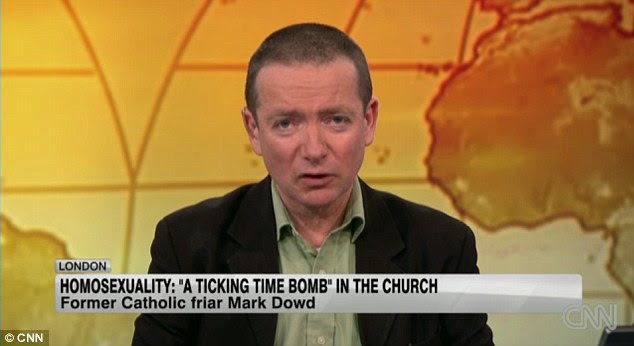 By MARK DUELL
An openly gay former Dominican friar insisted today that homosexuality is the ‘ticking time bomb in the Catholic Church’ and that homosexual men are ‘massively over-represented’ within the Church.
Mark Dowd, who is now a journalist, said research for his 2001 Channel 4 documentary Queer and Catholic suggested that at least half of people attracted into seminaries in the priesthood are gay.
His comments came as the former leader of Roman Catholics in England and Wales, Cardinal Cormac Murphy-O’Connor, said the scandal-hit Catholic Church must undergo renewal and reform.
Mr Dowd told CNN: ‘When you have this culture of secrecy and guilt and repression, you have conditions which foster the potential for blackmail and for manipulation.