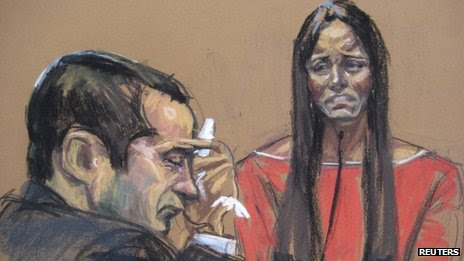 you read the transcript of the trial you would want to cry. A Family man
with a good job and family, got into his mind that he wanted to eat women.
Not Men. Women starting with his wife. And because everything is on
the net he found other with the same desire! His wife testified he had
hundreds of naked pictures in boxes, some even decomposed. This is
a case in which at least a few nobels should be written.
The estranged wife of a New York City policeman has told a court about her discovery of his alleged plot to kill her and cannibalise women.
Kathleen Mangan-Valle said she found emails detailing husband Gilberto Valle's plans to slit her throat, and kidnap and kill her friend.
Mr Valle, 28, is charged with conspiracy to kidnap, and using police databases to make a list of targets.
But defence lawyers told the court it was merely a role-playing fantasy.
Ms Mangan-Valle, 27, testified as the trial opened on Monday that her husband used to live a normal life until "weird stuff started happening".
Internet searches
She said he began to ask where she liked to jog and whether the route was well-lit or busy.
Continue reading the main story
Eventually she used spyware to discover the evidence on his computer.
Ms Mangan-Valle told the court: "I was going to be tied up by my feet and my throat slit and they were going to watch the blood drain out of me."
She said his other plans included putting her friend in a suitcase and taking her somewhere to be murdered.
Mr Valle discussed how two other women would be "raped in front of each other to heighten their fears", and another would be roasted alive over a fire, said Ms Mangan-Valle.
"The suffering was for his enjoyment and he wanted to make it last as long as possible," she added.
The prosecution said the plans had come to light after Ms Mangan-Valle moved out of the marital home and reported her husband to the FBI.
They found a "heinous plot to kidnap, rape, murder and cannibalise a number of very real women", assistant US attorney Randall Jackson told the court.
He added that Mr Valle had tried to contact possible victims, including a primary school teacher.
The defendant had also allegedly used the internet to search for the best rope for tying people up, human flesh, white slavery and chemicals to render someone unconscious.
But in her opening statement, defence lawyer Julia Gatto said: "The charges are pure fiction."
"You can't convict people for their thoughts, even if they're sick," she added.
Both the witness and accused wept when a defence lawyer showed the court a picture of Mr Valle in his police uniform, feeding their newborn daughter.
The defendant is expected to take the stand during the trial.
If convicted, he faces a possible life sentence.
Over 5.6 Million Reads Adam Gonzalez at February 26, 2013