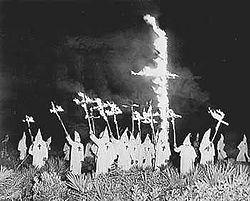 Chicago’s Cardinal Francis George has never been shy about expressing his views on divisive issues like abortion rights and civil unions for same-sex couples.

But gay rights groups say the Chicago archbishop crossed the line when he compared the gay rights movement to the Ku Klux Klan.

The comments came during an interview Wednesday with Fox Chicago. When the cardinal was asked his views of a local pastor complaining that the annualgay pride parade would force the church to cancel its morning mass, George said he supported the pastor.

"You don't want the gay liberation movement to morph into something like the Ku Klux Klan, demonstrating in the streets against Catholicism." George said.

Pressed by the interviewer, George acknowledged that it was a strong analogy, but reiterated his sentiment.

“The rhetoric of the KKK and the rhetoric of some of the gay liberation people -- Who is the enemy? The Catholic Church,” George said.

On Wednesday, organizers with Chicago's annual gay pride parade agreed to a later start time after Our Lady of Mt. Carmel Church leaders objected to a newly-proposed route they claimed would block access to Sunday Masses. Leaders said the new route would draw massive crowds and block the church's entrance.

On Thursday, Equally Blessed, a coalition of four Catholic groups that work for LGBT rights, called his comments “crude” and “demagogic."

“Cardinal George’s offensive comments are further evidence of just how insensitive and out of touch the hierarchy is, and why opposition to its views is necessary,” the group said in a statement.

“Whether it was the best choice of analogy I don’t know. Taken out of context the meaning can be misinterpreted,” an archdiocesan spokeswoman said. “I would suggest people read the whole interview.”

Email ThisBlogThis!Share to TwitterShare to FacebookShare to Pinterest
Labels: Religion/homophobic