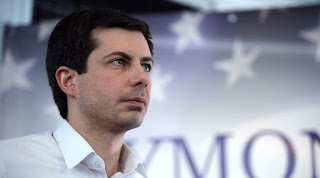 BY DAVID CATANESE
the state.com

Internal focus groups conducted by Pete Buttigieg’s presidential campaign this summer reveal a possible reason why he is struggling with African-American voters: some see his sexuality as a problem.

The 21-page report, conducted by the Benenson Strategy Group with black Democratic South Carolina voters in mid-July and obtained exclusively by McClatchy, found that “being gay was a barrier for these voters, particularly for the men who seemed deeply uncomfortable even discussing it. … [T]heir preference is for his sexuality to not be front and center.”
While the report stated that Buttigieg’s sexuality was not a “disqualifier” for these voters, some of the focus group participants questioned why Buttigieg even brought it up.

“That’s not my thing but I wouldn’t want to know that as a candidate,” said one female participant under 40. “Too much information.”
“I’ll go ahead and say it,” said a male participant. “I don’t like the fact that he threw out there that he lives with his husband.”

Buttigieg, the 37-year old South Bend, Ind., mayor, is openly gay and married to his husband, Chasten. While Democratic elites and donors have celebrated his surprise candidacy, this in-depth survey presents a rare look into the unvarnished views of a major voting bloc in the party and the steep hurdles Buttigieg faces in making inroads with it — an imperative to win the nomination.

After three 90-minute sessions with a total of 24 uncommitted black voters in Columbia, South Carolina aged 25 to 65, just one — a woman over 40 — said they were considering voting for Buttigieg. Conversely, all but one said they were considering voting for Joe Biden, described in the report as “the clear and dominant front runner” in the state that holds the fourth Democratic nominating contest.

“It’s hard to underestimate the power of the Obama association with these voters,” the report states.

The focus groups revealed some other potential pitfalls for Buttigieg with these voters, including his relative youth, political inexperience and low name recognition.
“They find it hard to believe that if Barack Obama struggled with Congress, that a young, new face would be able to make progress, especially on issues as tough as racism and inequality,” the report reads.

Some of the focus group participants wondered whether foreign leaders would accept a gay president. “Are they going to relate to him with a husband?,” a female participant over 40 asked.

“We need someone in the position now as a strong leader coming from what we have now, and that’s the only reason I think that would hurt him,” added a male participant.
Buttigieg campaign officials argued they’ve made progress over the past few months with a larger staff presence and that placing their candidate in front of more black audiences would alleviate concerns over time.

“Once people meet him, they like him. It’s a thing of, ‘We don’t know who he is,’” said Brandon Neal, who is leading Buttigieg’s African-American outreach.

But the focus group findings dovetail with recent public polling that has shown Biden leading and Buttigieg struggling in South Carolina, where African-Americans make up nearly two-thirds of the Democratic primary electorate. A recent Fox News survey showed Buttigieg at less than one percent with black voters in the state.

The Buttigieg campaign has known from the beginning that decades of deep-seated discrimination, from Americans of all races and backgrounds, against the gay community could hinder his longshot 2020 bid. And many voters in the South still hold different cultural and religious beliefs from those who live above the Mason-Dixon line and on the coasts.

Approval of same-sex marriage has steadily risen among all Americans over the past two decades. But a national Pew Research survey conducted last spring found that support among blacks (51%) still lagged behind whites (62%) and Hispanics (58%)
Clay Middleton, a South Carolina Democratic National Committee member currently advising Cory Booker, said he was not surprised by the Buttigieg campaign’s findings.
“I’ve been a black guy all my life in the South and it is one of those things. African-Americans, when it comes to certain things, is very conservative,” Middleton said. “If you needed a focus group to tell you that, ok.”

Of all members of the focus groups, older women were observed to be the most capable of moving past Buttigieg’s sexual orientation, but even they preferred he didn’t make it a focal point.

“I know there’s going to be that one little thing that holds him back,” said a female over 40. “I’m fine with it, to each their own, but … ”

Buttigieg hasn’t centered his campaign around gay rights. But he frequently recounts the struggle he endured to come out, a decision he made after he was elected mayor.
Earlier this month, Buttigieg rolled out a comprehensive agenda for the LGBTQ community, which includes amending the Civil Rights Act to prohibit discrimination based on sexual orientation, ending conversion therapy and rescinding the ban on transgender military members.

At a recent CNN town hall, he spoke about reducing the HIV rate in the black community by capping the amount anyone pays for prescription drugs, like Prep, which prevents the transmission of the virus.

Pressed on his lack of black support on Fox News Sunday, Buttigieg touted having “the most comprehensive plan of any candidate to tackle systemic racism in this country.”
“There are a lot of voters who are still sizing up their options,” he said.

Johnnie Cordero, the black caucus chairman of South Carolina Democrats, said he spoke one-on-one with Buttigieg about running as a gay candidate in the South last spring.

“To be honest with you, it’s going to be a problem. I know he knows that because we’ve discussed it,” Cordero said. “My advice to him was, don’t flaunt it. … I’m reluctant to say this for publication, but it’s an important fact.”

It’s blunt advice that’s divergent from what Buttigieg heard from Rev. Al Sharpton, who told him to campaign in the South with his husband “because we have got to break down this barrier, unapologetic.”

Cordero said personal engagement with African-Americans in private settings would be the best way to allay their skepticism.

“Just don’t force it down people’s throats. That was my advice to him,” Cordero said. “Oddly enough he agreed it was not to his advantage to make a big deal out of it.”
“He can change it not overnight but dramatically, that outside of that issue he is a person with integrity and honesty,” Cordero added.

Former DNC chair Donna Brazile said she believes that black voters have shown to be more tolerant and accepting than most Americans once they get to know the person.
“The mayor must convince these voters of what they share in common versus our vast differences of background, personality or sexual orientation,” Brazile said. “The best place to start is by reminding these voters that he is a person of faith.”

Buttigieg’s faith is one of the topics the campaign tested in the focus groups. For older women, it was “a real winner and pushed them past their doubts,” the campaign found. But some African-American men were more skeptical.

“How can you refer to God when a lot of people think you’re living ungodly? You know what I’m saying,” asked one male participant.

The campaign concluded that a focus on “older women will be our most effective way to make inroads with black South Carolinians.”

Buttigieg has focused more attention on Iowa and New Hampshire, early-voting states with predominantly white Democratic electorates. But the campaign maintains it is committed to South Carolina, where Buttigieg will make eight stops this weekend, including at a tailgate at a historically black university and an AME Zion worship service.

The campaign said it is also ramping up advertising in black communities and is preparing to deploy African-Americans from South Bend to serve as surrogates.

Sean Shaw, a black Democrat who was the Florida attorney general nominee in 2018, has stumped for Buttigieg in South Carolina. He said there was no need for the mayor to address his sexual orientation given the high stakes of defeating President Donald Trump.

“Listen, it’s 2019 I don’t think he has to address it. This really did not come up when I was in South Carolina. I did not run into people that were not ready to go there,” Shaw said. “Name ID was a large barrier. Pete’s the one who’s come out of nowhere. He’s just gotta keep chopping at trees.”

The focus groups were also utilized to drill down on one of the most memorable moments of the primary so far: Kamala Harris’ challenge to Biden’s record on race during the first debate.
Their finding: Black South Carolina voters were less impressed with Harris’ busing retort than white voters in Iowa and New Hampshire. While Harris was seen as “aggressive” by some participants, older women found her attack on Biden offputting.

“Trustworthiness went out the door because [Kamala] will never be on-topic with something. She will try to garner that black vote and that black sympathy and speak to us as if we are less,” one woman said.

“Look at where she’s at. Get over yourself. I was a product of busing. It does make me lose respect for her,” added another female over 40.

Young women were confused by the busing topic altogether. “What does she mean by that, actually on a bus or what was she saying?” asked a woman under 40.

Overall, participants credited Biden for remaining composed and liked that he “didn’t stoop to Harris’ level and hit back in the face of an unfair attack.” These African-Americans appeared willing to look past Biden’s flaws due to his connection to Obama.

“When they think about who can beat Trump, these voters go with Biden -- no other name truly surfaced in response to this question,” the Buttigieg report read.