In A Corner of Pakistan Children are Being Rape, Killed and Are Disappearing 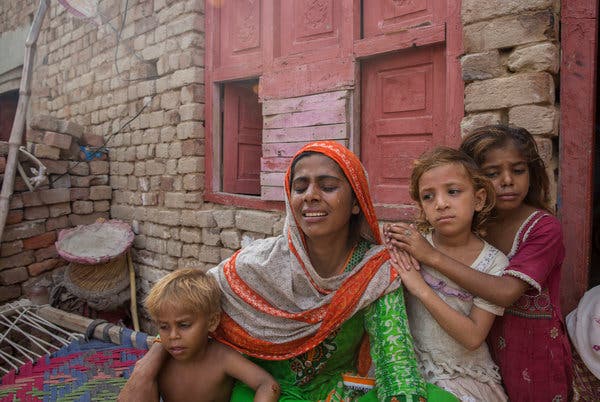 Ghazala Bibi, center, with her three remaining children. Her 9-year-old son, Ali Husnain is believed to have been killed by the same person who killed Muhammad Faizan.CreditSaiyna Bashir for The New York Time

CHUNIAN, Pakistan — When the 8-year-old Muhammad Faizan went missing on Sept. 16, he was the fourth child to mysteriously disappear in the eastern Pakistani city of Chunian since June. Three other boys had been missing for several weeks.

Faizan’s body was found in a deserted area about two miles from his house in a poor neighborhood of Chunian in the Kasur district of Punjab Province. The autopsy revealed Faizan had been raped before being killed.

The police also found two skulls, bones and pieces of clothing near the body. Ghazala Bibi, the mother of a 9-year-old boy who had also gone missing, Ali Husnain, recognized her son’s shirt. The fathers of two other boys, ages 8 and 12, also learned their sons were victims.
The crimes have incited horror and outrage across Pakistan. Angry protests erupted in Chunian after the grisly discovery. People surrounded the local police station, blaming police neglect.

On Thursday, the police chief of Kasur, Sohail Habib Tajik, said in an interview that a 27-year-old man, Sohail Shahzad, had been arrested this week in connection with the four killings after an extensive manhunt.

ImageGhazala Bibi, center, with her three remaining children. Her 9-year-old son, Ali Husnain is believed to have been killed by the same person who killed Muhammad Faizan.
(Lead picture above)

Ghazala Bibi, center, with her three remaining children. Her 9-year-old son, Ali Husnain is believed to have been killed by the same person who killed Muhammad Faizan.CreditSaiyna Bashir for The New York Times

“Sohail Shahzad has confessed of the killings,” Mr. Tajik said, adding that the suspect used to drive a rickshaw in Chunian and had lured the children by offering them money to collect firewood.

But the arrest and reported confession do not answer the question on parents’ minds: Why does this keep happening in Kasur?

After years of disturbing attacks in the district, Kasur has become a byword for the rape and killings of children. Cases keep surfacing. And parents say they are afraid to let their children go outside.

“We tie our remaining three children with a rope in the night, just to make sure that they don’t slip away from us,” said Ms. Bibi’s husband, Muhammad Afzal.

The distraught parents of Kasur are bitter and angry at the police. The officials, they said, treated them with callous indifference, mostly urging them to search for the missing on their own.

Prime Minister Imran Khan even intervened, announcing on Twitter that the entire lineup of police officials in Kasur had been removed and an investigation ordered. “There will be accountability for all,” Mr. Khan said.

Police investigators in Chunian last week.CreditSaiyna Bashir for The New York Times
The streets of Chunian were deserted recently, even during the daytime. Many children are now accompanied by an adult to and from school for safety.

For the parents, the stress was one more worry piled on already difficult lives.

“Should we worry about earning our livelihood or worry about children’s whereabouts?” said Mr. Ramzan, a cleric in the local mosque. “It is not easy to earn a living these days.”

Inam Ghani, the additional inspector general of the Punjab police, said that Kasur is a peculiar case “because there have been serial pedophile murders.”

In January 2018, Zainab Amin, 7, was raped and killed in Kasur. Her body was found in a trash site. Before her, 12 other child rape cases had been reported within roughly a mile radius. In 2015, a gang of men was arrested after reports emerged that they had sexually abused at least 200 children in a rural area of the district. The men made videos of the abuse to either sell underground or use to extort money from victims’ families.

Zainab’s murder had also incited days of angry riots in Kasur, and the government and leading political parties, including Mr. Khan’s Pakistan Tehreek-e-Insaf party, vowed never to let such attacks occur again. After 12 days, the police arrested a 24-year-old neighbor named Imran Ali. An anti-terrorism court sentenced him to death on February 2018. He was hanged later that year.

It was widely expected that the case of Zainab, which had become a symbol of child sexual abuse, would result in broad police overhauls and awareness of such crimes.

But more than a year later, there is no letup in reports of child abuse in this district and in the country.

“There is no child protection policy in Punjab,” said Sarah Ahmad, chairwoman of the government-run Punjab Child Protection and Welfare Bureau, adding that there was a need for tougher legislation against child abuse.

“There is no child protection policy in Punjab,” said Sarah Ahmad, chairwoman of the Punjab Child Protection and Welfare Bureau.

“There is no child protection policy in Punjab,” said Sarah Ahmad, chairwoman of the Punjab Child Protection and Welfare Bureau.CreditSaiyna Bashir for The New York Times
She said the abuse was not limited to a specific place and that she is planning an awareness campaign in Kasur and other districts in the province. “Child abuse cannot be stopped in days or months,” Ms. Ahmad said. “It will take years.”

Many theories have offered for why Kasur has a bigger problem than other places — people have blamed pornography, organized criminal gangs who sell videos of the crimes on the internet, social divisions and prostitution linked to growing cities. But police officials dismiss claims of gangs selling violent videos online.

Kasur is known for its tanneries and small industry. Chunian, which is about 40 miles from Kasur city, also has a small industrial area.

Mr. Tajik, the police chief, said that rape cases are reported all over the country, but that Kasur had been spotlighted because of the evidence of serial killings. He also cited rapid urbanization in many cities and towns for a breakdown in the social order.

“The social system is broken down in most towns, especially in Kasur district,” he said. “There is no monitoring system. In Kasur district, people with large families are living in very small houses. The rents are very low and people move in and out quickly, without strict identification and vetting.”

Ghost Abad is a poor neighborhood where power cables dangling overhead in narrow alleys, with just enough space for a motorbike or rickshaw to pass. The stench of sewage wafts through the air. Most of the residents are employed as laborers or low-paid workers in nearby markets.

Ms. Bibi and her husband have been particularly devastated by their son’s killing. “Our shoes were worn out, and we almost went mad trying to find Ali Husnain,” Mr. Afzal said, teary-eyed.

His wife seemed frail and almost dazed. The family is now in debt. Their paltry savings were spent on printing posters of their son and several visits to Lahore, the provincial capital, where children from low-income families often run away to.

A picture of another boy whose remains were believed to have been found, Salman Akram, 8, held by his father, Muhammad Akram.CreditSaiyna Bashir for The New York Times
The police have been under enormous pressure to find those responsible for the recent disappearances. On Tuesday, Mr. Khan, the prime minister, announced a new mobile app that parents can use to report a missing child, which immediately alerts high-ranking police officers.

But the police, who now have a suspect in custody and have increased the number of officers in the district, cannot allay the trauma and apprehension of the distraught parents.

Ms. Bibi said she feared the killer could come again, jump over the wall of their house, and snatch away her remaining children, two daughters, and a son.

“Ali Husnain was my eldest son. He was very close to me,” she said with a deep sigh. “Now, we are left with sorrow for the rest of our lives.”