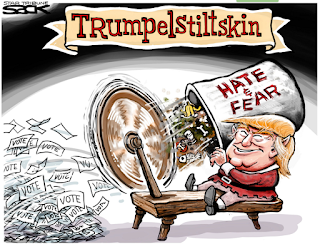 One cool thing about Donald Trump's campaign is that he's like some kind of hydra of hateful rhetoric. If you focus on one head yelling about how blacks live a hellish existence that can only be fixed by a national stop and frisk program, his other head is screaming about all the sexual assault it did. And if you stop that head, another one is threatening to sue you and another one is bankrupting your hometown and another one still is yelling about a mass deportation program. While we’ve all been wrestling with those heads though, there's another one that's appeared, one that screams about conspiracies of international bankers plotting to steal the lifeblood of the nation. Great, perfect.

His Florida rally yesterday was Donald Trump's first public appearance after multiple reports of his past alleged sexual assaults came out, and was a bellwether of how his campaign would respond going forward. Turns out the new direction of the campaign will be to blame Hillary Clinton meeting in secret “with international banks to plot the destruction of U.S. sovereignty in order to enrich these global financial powers, her special interest friends and her donors."

Hmm...a conspiracy of international bankers, where do I usually hear that one? Stormfont, Alex Jones, other well-respected media organizations. Maybe if Donald Trump's campaign manager wasn't the guy in charge of the media outlet that went with "renegade Jew" as a headline this wouldn't be a big deal. Maybe in a normal year this would be overthinking things. But in an election where a resurgent white nationalism is proudly behind Trump, a speech about international bankers plotting to steal the wealth of the homeland takes on the character of a Nuremberg rally.

And let's not forget, this isn't Trump's first dance with anti-Semitism. Or his second. All the open letters in the world from his cowardly son-in-law about how Donald Trump isn't an anti-Semite can't hide the fact that that with just weeks to go before the election Trump is summoning up anti-Semitic imagery for screaming crowds and suggesting he's the only person who can stand up to the threat it faces. Hail Hydra.