There is No National Debt 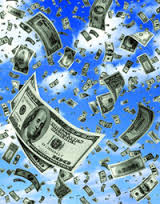 The public is lied to when it comes to the so-called national debt.
They're clueless about it, as are most, if not all, of our lawmakers.
First off, there is no debt. The debt is dollars. The government spent $20 trillion more than it took away in taxes over the last 240 years, and those dollars, held by the non-government, comprise a big portion of the non-government's wealth. Nothing is "owed." It's owned, by us, the people.
Second, there is nothing to pay back. The money was paid, ended up in someone's bank account and now it's being held in the form of Treasuries. What's a Treasury? A Treasury is a dollar, the only difference being it's a dollar with a term (duration) and a coupon (interest payment). Why would people hold dollars in the form of Treasuries? To earn some interest, that's all. It's like saying, why would you put your money in a savings account as opposed to a checking account? Same reason, to earn interest. If you want it back in your checking account, you tell your bank and it switches it back from your savings account to your checking account.
That's how it works with the government, too. It "pays back" holders of Treasuries all the time. That's called a redemption and when Treasuries are redeemed the government simply instructs its bank, the Fed, to take back the securities and credit the individual's (or firm's or foreign government's or whomever's) bank account and, voila, it happens. Paid back. In fact, it happens so regularly and on such a big scale that it will totally blow your mind.
I am about to give you some numbers. Mind you, these are not numbers I made up or to which had some kind of top-secret access. Nor is this inside information that I am exposing. Rather, these are publicly available figures that you can get -- free -- right off the U.S. Treasury Department's website.
The resource is called the Daily Treasury Statement and it's really a fascinating document. It is posted daily on the Treasury's website and it's literally like looking at the checkbook of the federal government. Just like your checkbook, it has all the deposits and all the withdrawals, among other things. You can see everything. Every line item of spending (withdrawals) and every item of revenue (deposits) that runs through the government's accounts daily, monthly and yearly.
On this document there is a table -- Table III-A -- that gives all the redemptions of bills, notes, bonds and other securities the government redeems (pays back) every day, month and year.
If you go to the last statement of the fiscal year, Sept. 30, and you scroll down to that table I just gave you, Table III-A, you will see the government redeemed (paid back) $94.2 trillion in one year! I put a screenshot below.
Please note: All figures on the daily Treasury statement are in millions, so don't come back to me and say it was only $94.2 million. It's $94.2 million million. That's $94.2 trillion. See the image below.
Daily Treasury Statement

View Chart »  View in New Window »
Ninety-four point two trillion! In a single year. And nobody knew about this. Furthermore, the world didn't fall apart, the dollar didn't collapse, interest rates didn't spike, we had no inflation and everything was fine.
There is the proof, right in front of our noses, that the debt is meaningless. It's just a bunch of bookkeeping entries. Keystrokes. It's time we stop fretting over this. People need to educate themselves about what this debt is and how they are being manipulated and propagandized about it.
The debt is not a bad thing, it is an asset of the non-government; however, ignorant, cynical, corrupt, dogmatic and self-serving groups like the Pete Peterson Foundation and organizations like Fix the Debt are in the business of keeping Americans misinformed and getting them to act against their own interests. These groups are bad and need to be stopped.
There is no debt!