UK: Lord Montagu Dead at 88 (tried-jailed for being a homosexual)

The aristocrat whose trial for consensual homosexual acts helped usher in the end of legal discrimination against gay people has died aged 88.

Determined to avoid being defined by his 1954 ordeal, Edward, 3rd Baron Montagu of Beaulieu, succeeded in becoming better known  for founding the National Motor Museum at his stately home of Palace House in Beaulieu, Hampshire.

As the chairman of English Heritage from 1984 to 1992, he also played a major role in the preservation of the nation’s historic houses.

But perhaps his greatest contribution to public life was thrust upon him in 1954 when he was arrested and tried amidst a moral panic about homosexuality. 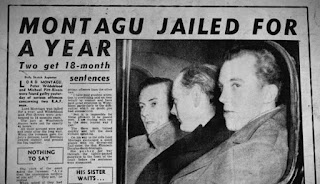 Outwardly a conventional member of the upper classes, with an Eton and Oxford education and a stint in the Grenadier Guards, Lord Montagu led a double life as a bohemian bisexual. In 1954 he was arrested over the disputed events at a party in a beach hut near his estate.

Lord Montagu, who always maintained he was innocent, said the small gathering with his cousin Michael Pitt-Rivers, and his friend Peter Wildeblood – who bought two RAF men Edward McNally and John Reynolds – had involved nothing more than drinks, dancing and some kissing. But it took place in the summer of 1953, amid Establishment paranoia partly fuelled by the defections of the gay spy Guy Burgess. Conservative Home Secretary Sir David Maxwell Fyfe ordered a “new drive against male vice” that would “rid England of this plague”.

Amid what he later described as a “witch hunt”, Lord Montagu was arrested in January 1954. “I will never forget being woken up at 7am with the police banging on the (bedroom) door,” he recalled. “I was in bed alone, may I say.”

Lord Montagu, Mr Wildeblood and Mr Pitt-Rivers were charged with “conspiracy to incite certain male persons to commit serious offences with male persons” – the first time this charge had been used since the Oscar Wilde trials in 1895. Suspicion grew that the proceedings at Winchester Assizes were really a show trial and the UK’s own anti-homosexual version of  McCarthyism.

Lord Montagu, then 28, was sentenced to 12 months in prison, and his co-defendants were sentenced to 18 months imprisonment. But when  the trio left the court, the  waiting crowd burst into  sympathetic applause. Newspaper editorials spoke of a victimless crime.

Maxwell Fyfe, the Home Secretary who had promised a drive against “male vice”, subsequently felt obliged to appoint a committee under Sir John Wolfenden, the Vice-Chancellor of Reading University, to investigate the law’s treatment of homosexuals. In 1957, this recommended that consenting adult homosexuality should not be a criminal offence. It was a key step towards the legalisation of homosexuality in England and Wales in 1967.

But Lord Montagu did not talk publicly about the case until decades later.

So successful was he, that many now know him as the founder of the motor museum that he created in 1952 as a tribute to his father, a pioneering motorist.

He was also a proud custodian of the Beaulieu Estate, which he took over in 1951 at the age of 25 without sufficient income to cover the running costs.

“To any rational being,” he said later. “The wise solution was to get rid of it. For me, however, neither entirely sensible nor rational, that was unthinkable.”

Their marriage ended in 1974, after which he wed Fiona Herbert. They had a son, Jonathan, in 1975. His elder son Ralph succeeds to the barony.