If you think the tittle is harsh then that makes two of us but it is also true and fair. Many remember the Mario Cuomo that collected favors, made threats but kept his promise to bring same sex marriage to New York State, when it was not a popular thing to do anywhere. Finding himself short of a few votes after getting the Democrats, working families and independents on board for the same sex legislation vote in Albany he convinced a few Republicans even though it will cost them their jobs, which it did to vote with the democrats. It was a beautiful thing to see government at its best. Compromising for making it better for its citizens like it had been promised. I was proud to be a New Yorker once again!

How proud NY felt particularly after having no Governor for 4 years thanks to a very horny Governor who kept flying tot Washington DC to see a bunch of super expensive Prostitutes. He left us with the man he chose. A politicly blind man who only knew how to make deals and follow others. At the Governors chair he did the same and accomplish nothing. Not even promises he’d made a few months before they sat him at the helm he would not remember nor dare to keep. He even veto the legislation that passed to have same sex marriage in New York. A democrat in name only who turned Republican to collect personal favors and keep the whole government from splitting in every direction due to his mistakes and inaction. Still there was no dance party in NY they did not attend and they just had a good old time on the tax payers money. Then came Cuomo.

After the same sex marriage vote Mario started running high numbers of approval if for nothing else for having the balls to try to accomplish something. The problem was he forgot other promises he’d made for the same reason other politicians before him forgot their promises.

In education instead of helping the new elected mayor in New York City he took advantage of a new and sometimes naive mayor. He went against him in giving New York more money to hire new teachers and increase their numbers. Instead he wanted to keep the church happy, the church he belongs to and pissed off when he went for same sex marriage. Now he was going to make them happy at the expense of poor kids whose parents could not afford private school. He gave the money that should have gone to the Dep. of Education to state vouchers to the parents for private schools benefiting the Catholic Church at crunch time for them and the city kids. One would think that when the choice in the budget to allocate money to a hurting Dept. of Education than to Private school he would recognize that is not right for parents and their kids in public school to pay with their taxes and also would have to subsidize the private religious sector. When the private sector is in the scale of money to be allocated the public sector be education or any other program, then the scale has to be tipped on their side. It’s a public government we pay for not a private one to just private interests. This part always gets lost on politicians and it’s the single worse thorn in a democracy such as ours.

Mario thought he pulled a fast one by blaming the new mayor of New York City for not being smart enough to “know how Albany works.” In other words the mayor should have known how to play ball with the governor before running for mayor. That is naked politics at its worse but the part that really hurt is that the mayor is a democrat elected by those poor and lower middle class parents. Where was Cuomo? He was no where but smirking fromAlbany telling the Mayor Im smarter than you! Who gained on this game of chicken? Cuomo did but by going against his own backers and against his promises. For what? To win a fight? May be it ran deeper than that but it was just offensive to have talking mouths from Albany speaking for the governor and saying how naive the mayor was.

When the year was up for rent controlled apartments again Cuomo played the same game of chicken. This time he sided with the landlords and school vouchers instead of helping fix and renew laws due to expire. The laws did expire waiting for a compromise and some action by the governor. There was only silence from Mario. Again he is blaming the city on this issue. Everyone had to rush on knee jerk legislation passing laws in a rush so the city would not loose thousands upon thousands of rent control apartments. Problems were not fixed just band aid and the laws were extended having them come up again in a few years.

Cuomo missed a golden opportunity to help the city with its bulging population problem which clearly helps Albany and at the same time keep some from loosing their apartments and having the city and the state subsidize them for shelters and hotel rooms. Which is cheaper? More Humane? Smart in the long run and now? No wonder Politicians don’t like dealing with it.

Many wonder how can a family of 3 afford a two bedroom rent control apartment in Queens,  paying $2600 a month with an income of $45k year before taxes? and that’s being under rent control.
This family is going to keep after taxes around $26k [for Education expenses, commute, food, clothes, insurance, utilities??] That is living month to month with no room for an emergency or sickness.

What about someone disabled or retired on SSDI getting $1400. a month and paying  a studio for 1100 + utilities do the math there. I personally know lots of people in that bracket. Who helps them? They have one foot on being homeless in it happens many times a month in NYC. Where is Mario??
Pure politics and pure politics breeds pure corruption. When you start forgetting why you were elected and start planning for when your four years are up, like if when you were elected you were promised to come out super richer than when you went in, with super friends that will sling you where ever super place you want to be.

It would seem that’s where the Cuomo administration is brought us now. Pure politics at the Albany show place. Back to the days of the blind and the do not care of the problems of the poor and lower middle class. When You have NYCHA constructing expensive condos on the playgrounds of the people that live there which by the way they have to wait 3 years for a repair; it becomes a breading ground to separate New Yorkers from each other. Who would think about such stupidity? Someone who doesn’t know the problems that will pop up because they are looking at a ledger of numbers and don’t see that behind those numbers are human beings.
Adam Gonzalez 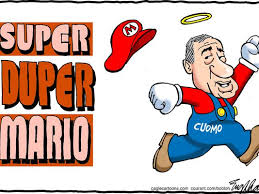 U.S. Attorney Preet Bharara is probing the process by which three developers who are Gov. Cuomo donors came to get the bulk of a billion dollars in state contracts to develop major projects in Buffalo. Federal prosecutors have subpoenaed the State University of New York Polytechnic Institute, the president of which, Alain Kaloyeros, oversees the Buffalo Billion program. The program is supposed to generate thousands of upstate jobs through the tech, clean-energy, and pharmaceutical facilities the Cuomo cronies were tapped to build with $855 million in taxpayer money.
Pressed earlier this summer by a reporter for Buffalo's Investigative Post who was seeking details of the bidding process and faced illegal stonewalling across multiple state agencies and state-run nonprofits, Kaloyeros said, "We are not political operatives nor do we respond to perceived threats and terrorism." That "terrorism" apparently consisted of repeated phone calls, emails, and Freedom of Information Law requests.
Still, little is known about the selection process. What is clear, according to the Investigative Post, is that developer McGuire Development scored the $55 million contract to renovate skyscrapers in Buffalo to accommodate IBM, then three months later, donated $25,000 to Cuomo's campaign. The firm LP Ciminelli scored a heftier $750 million contract to build a solar-panel factory. Its president, Louis Ciminelli, is one of Cuomo's biggest donors in the region, having contributed $96,500 to the governor's two campaigns. Until competitors balked, the request for bids was written with the requirement that bidders have 50 years experience working in Buffalo, which only LP Ciminelli did. That company and Ciminelli Real Estate, run by Louis Ciminelli's brother, won the $50 million contract to build drug research space at a Buffalo medical campus. Paul Ciminelli's $10,500 to Cuomo and $5,000 to Lt. Gov. Kathy Hochul cannot have hurt.
The New York Post, which first reported the subpoenas, notes that Kathy Hochul's husband Bill is U.S. Attorney for the district centered in Buffalo, and Bharara seems to be stepping on his toes in a big way. In a recent speech, Lt. Gov Hochul said that before the Buffalo Billion program, "people had given up hope."
Asked on Friday about the investigation, Cuomo told the New York Times, “Yeah, I don't know anything about that."
*BY NATHAN TEMPEY IN NEWS
Over 5.6 Million Reads Adam Gonzalez at September 21, 2015