Bobby Petrino jr. [Son of Football Legend] Comes out and Comfortable in his skin-are you? 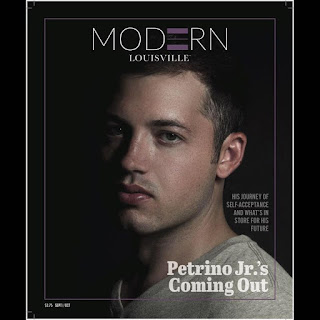 "As we were both walking off the field following the practice, I told him it was going to be released tomorrow and I had a copy in my car for him," Petrino Jr. told me. "To my surprise, he said ‘Oh, don't worry about it. I already have a copy and read the article. I am so proud of you and love you so much!’ and gave me a huge hug."

The reaction was something Petrino, 25, could never have dreamed of when he was younger and feeling scared, isolated, lonely and depressed after realizing he was gay. The person he feared most telling was his father, the big-time football coach. His dad's embrace last week showed Petrino how far he and his family had come.

I first heard from Petrino in April when he sent this message to Outsports:

"Thank you for all you do! Wish you were around when I was a youngster. Makes me happy young athletes these days won't feel alone. Keep up the good work! Thanks again!"

I verified that he was the son of Bobby Petrino the football coach and began a correspondence with him about Outsports writing a story on his being gay. The problem was that he was adamant at the time that it not be a coming out story, which made it hard for us to agree on an angle. He explained that he came out to his family in 2012, right around the time his dad was fired as head coach at the University of Arkansas after he was involved in a motorcycle crash along with a female passenger who was not his wife. Petrino Jr. did not want to relieve that dark and painful time for him and his family.

"When we first talked about doing a coming out story, I initially was worried about bringing all those memories up again," he told me.

But he had a change of heart when he took a summer job this year with the Seattle Storm of the WNBA and had time to be by himself and reflect.

"For three months I spent working for the Seattle Storm on their E-Team -- entertainment -- which worked the games and events. I had a lot of free time and fell in love with hiking and camping. I mostly did these with just me and my dog [Lana]. I found out a lot about myself and grew tremendously over this summer in Seattle.

"After my return, I was approached by Tracy Blue, the editor of Modern Louisville Magazine, to be on the cover and tell my story. I was ready for it now and I felt like it was something I needed to do. The first time I saw the magazine, I got pretty emotional. As a child, I never thought that at 25 years old this would be possible."

Modern Louisville is a new LGBT magazine that published its first issue last week with Petrino on the cover. The person once terrified of coming out was so proud that he made the magazine cover his new Facebook profile photo.
The article by Remy Sisk (which starts on Page 24) details Petrino's upbringing as a closeted gay kid struggling to be comfortable with himself and fighting periods of loneliness and depression. The first person he finally came out to was his sister and then his mom, Becky, but had his mother tell his father. As it says in the magazine story:
As Petrino is generally closer with the ladies of the family than with the men, he allowed his mother to tell his father and brother. Consequently, he and his father never really had the conversation. Petrino does recall when his father acknowledged that he knew. "He gave me a really big hug and told me he loved me no matter what. He's never treated me different. If anything our relationship is better ... He's engaged [my boyfriends] and always been really nice."

Although his final emergence was fairly painless, his family underwent a significant change of ideology once Petrino Jr. came out. "For them, things changed a lot," he describes of the time. "They went from thinking being gay was a lifestyle choice to realizing it's not a choice. And it brought us closer together."
Petrino grew up in a football family and moved several times as his father took new jobs. He was a total jock, in part as a way to hide the realization he was gay. He was shocked when a friend told him he thought he was gay in the summer between fifth and sixth grade. That was a lot for someone so young to absorb and he went through his formative years tightly holding on to his secret and throwing himself into sports. He was a natural at football.

"I played football, basketball, and baseball at Trinity High School in Louisville until halfway through my sophomore year," he told me. "I started as a sophomore, was named first team all-county, and we won the state championship that year. Then we moved to Atlanta where I just stuck to football and played one season at Greater Atlanta Christian School. A year later we move to Fayetteville, Arkansas. I only played football and was named newcomer of the year in Arkansas and first team All-State safety.

"I then signed to play at the Air Force Academy where I went through basic training and decided it wasn't for me. I think I chose Air Force because I thought it would be a great place where I could continue to hide my sexuality. At that point the Don't Ask, Don't Tell policy was still in effect. I went back to Arkansas and played for my dad until I tore my LCL (lateral collateral ligament) and decided to be done with sports."

What's interesting about Petrino's coming out story is how much it follows a typical pattern – he was scared and lonely and thought he was the only one. Once he came out as gay, the response was all positive, even from the one man who he feared would take it the wrong way.

"I wouldn't really say my dad helped me be comfortable with my sexuality growing up," he told me. "He was who I feared the most regarding it. I had a gay uncle on my mother's side and he wasn't really talked about too much. But once I came out to my dad -- and I was dating a guy at the time -- he was great about it. My boyfriends have always come over for family dinner, been on family vacations. And he was really nice to them and was interested in who they were. ... Everyone has accepted me and loved me for who I am. It is a non-issue in our family."

Petrino felt so comfortable that this year he marched in a pride parade. He attended the Louisville-Auburn season opener Saturday in Atlanta with three gay friends and went down to the sidelines for the second half. He has no role with the team "other than be the biggest fan."  Single now, he is graduating in December with an accounting degree from Louisville and told the magazine that he wants to be an elementary school teacher because he loves working with children.

As for life after coming out, Petrino wishes it could have happened sooner had he known the love and acceptance he would get.

"The reaction has been very positive," he told me. "I wish I could go back and tell my younger self that it was going to be like this. I received numerous Facebook messages from other guys that would tell me their story and how much they could relate to mine. It is nice to know that my story touched other people's lives and can make an impact in the Louisville community."

Bobby Petrino Jr. can be reached via email at R.petrino90@gmail.com.

This story appeared at outsports.com by Jim Buzinski
Over 5.6 Million Reads Adam Gonzalez at September 09, 2015