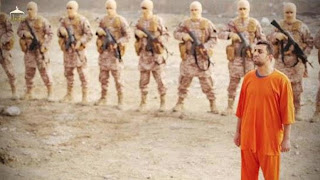 The Islamic State is at it again – brutally killing men accused of being homosexuals. Their latest victim was just a teenager, according to the Syrian Observatory for Human Rights.

In a recent report, the group said ISIS militants executed a 15-year year boy and nine other men in two separate locations in Syria but on the same charges of being homosexuals.

Director Rami Abdel Rahman of the monitoring group said the boy and two other men were killed in the town of Hreitan in northern Aleppo while the seven alleged other homosexuals were executed in Rastan, Homs province in central Syria.

Rahman told MailOnline that the boy had been arrested and locked up since last year. He said those killed in Rastan were shot in front of a large crowd that had gathered to witness the executions.

As of August this year, the ISIS has executed at least 30 people for being gay, the UN Security Council said. The group has deemed homosexuality punishable by death. It has also been persecuting other minorities throughout Iraq and Syria, especially Christians and Yazidis.

Jessica Stern, executive director of the International Gay and Lesbian Human Rights Commission, said accused homosexuals are being eliminated through stoning, firing squads, beheadings and pushing them off tall buildings.

The execution of alleged gays and the gruesome propaganda photos and videos earlier released by ISIS appear to be an attempt by the group to reinforce its rule of fear, Mail Online reported. Alleged gay people have also reportedly been stoned to death by crowds carrying out death sentences as directed by ISIS commanders.

The inhumane death sentences were done in different areas, including in the Iraqi city of Falluja and the ISIS de-facto capital Raqqa in Syria.

"At the executions, hundreds of townspeople, including children, cheered jubilantly as at a wedding," said Subhi Nahas, a refugee from the Syrian city of Idlib. "If a victim did not die after being hurled off a building, the townspeople stoned him to death. This was to be my fate too."

Another activist identified as Adnan from Iraq, bared that ISIS uses social media to hunt down gay people. "They are professional when it comes to tracking gay people. They hunt them down one by one. When they capture people, they go through the person's phone and contacts and Facebook friends.''

US Ambassador Samantha Power said at a recent UN meeting that it is time for the spotlight to be placed on ISIS treatment of gay people. "It's about time, 70 years after the creation of the UN, that the fate of LGBT persons who fear for their lives around the world is taking centre stage," Power said. “This represents a small but historic step,'' she said.